As I said yesterday I was at the Boomershoot site this last weekend.

The main objective was to take delivery on ammonium nitrate for future Boomershoots. Last time (see also here) I ordered 3000 pounds of AN and they brought a semi-truck and trailer. It was difficult to get it into a position close to the entrance of my shipping container production facility. So in the two days before the delivery I rearranged the dirt and rocks in front of the facility to make it easier to get into position.

This time I ordered two thirds more and they put it in something resembling a horse trailer pulled by a large pickup instead of the larger semi. Oh well, I like the changes I made and it was still easier for them than it would have been had I not moved the dirt and rocks.

At first we put down some rollers to unload the material. I’m sorry for the atrocious picture. The lens of my cell phone camera was dirty and I didn’t want to waste time cleaning it to get a good picture when the delivery guy was waiting on me:

From the time he was backing the trailer up to the container until they were all neatly stacked at the opposite end of the container was only 28 minutes. 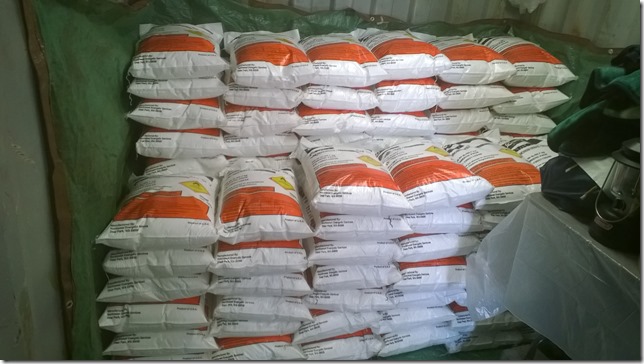 I did a lot of puttering around after he left. I removed bunch of old cardboard boxes for disposal at a recycling center. I had moved a lot of things out of the way to have a clear path to the rear and I put those back where I wanted them. I put the AN from two years ago on top of the latest delivery. An interesting thing I noted when I did this was that the date on the new bags AN was September 4, 2014 and the date on the old bags was September 4, 2012.

I tucked the tarp in around the AN and put a plastic sheet over the top to keep the condensation and occasional snow (that sometimes blows in through the ceiling vent) off the chemicals:

The ceiling of the container is not really sloped. It’s just the distortion from the wide angle lens on the phone camera.