I was sent, for a limited review time, The GunBox Biometric Hand Gun Safe.

They have a YouTube video on how to get into the box with a common tool. The video is not listed so that helps but security through obscurity is, putting it mildly, frowned upon in the security world.

The interior height should be a little greater. It was tough to get the lid to close with my STI Eagle. The oversized magazine well would hit the lid when I tried to close it. I was finally able to find a configuration to get everything, including hearing protection, in but it was tight: 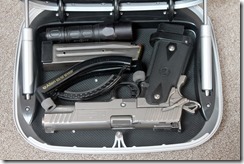 And if I didn’t have the gun in just the right spot it would fail to open unless I put some pressure on the lid when the mechanism was activated.

My Gun Blog .45 fit fine in most positions. Some positions were still an issue. The magazines had to be laying flat which took up more space than I thought they really should. My Surefire 6PX Flashlight was limited to certain locations in the box as well. 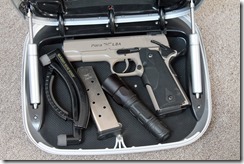 It does seem to be pretty tough. I was a little disappointed in the testing in their video:

I would have like to have seen attempts at prying it open by someone with a little more skill and strength than the small children shown in the video. But it’s cast aluminum. A hacksaw is going to cut through it in seconds so anyone that has access to tools, time alone with it, and doesn’t care about damaging the box will easily gain access. This is not intended to be protection against skilled and determined thieves.

It is opened via an RFID (wristband, optional ring, or RFID label to put on your phone or drivers license) or fingerprint. The slowest access time is with your fingerprint as it takes longer to read and process it than it does with one of the RFID access methods. From “the buzzer going off” to “first shot” took me about four seconds. With the wristband I could do it in three. I was a little annoyed with the wrist band in that I had to present a certain portion of the band to the sensor. For the easiest access to the box the buckle of the wristband needed to be on the top of my wrist which is the least attractive way to wear the band.

Initially I wasn’t too keen about the opening mechanism but I was focusing on the wristband. I still don’t think I would wear the wristband all the time. And if you left the wristband in a drawer or in a closet then it would be more susceptible to discovery by the kids. Don’t worry about having the wristband around if you don’t plan on using it or if you lose it. You can have the box unlearn all fingerprints and RFID devices and reprogram it for just the opening methods you plan to use.

And I might see putting the label on my drivers license even though it would be much slower to find my wallet in the pile of clothes beside the bed. It could read the label through the wallet just fine. It wasn’t necessary to remove the label from the wallet so the time to open would be primarily the time to get your wallet to the sensor.

Some people might find wearing a ring acceptable. I’m not a ring person and I wouldn’t wear a ring just for this gun box.

The fingerprint method seemed to work well enough. This is how I think I would use it. I programmed it to accept three of my fingers and one of Barb’s then she, her daughter, and I all tried all our other fingers in an attempt to get a false match. All attempts at false entry failed.

I had it learn the same fingers again with the angle I used when sitting at the desk and access was almost 100% on the first try. They claim it will hold “approximately 100 unique fingers” so you might consider programming it for the same finger in different orientations for more reliable opening. You do not need to do this for various horizontal (airplane yaw) angles. The sensor works just fine for 360 degree access on the horizontal plane. That is very nice feature and it work flawlessly for me.

Here is one of their many videos on the use of The Gunbox:

I liked this safe and for keeping guns out of the hands of children and casual access attempts by unauthorized people I would recommend people give it serious consideration. It’s attractive enough to leave on the nightstand and functional enough to keep the kids out of it.

8 thoughts on “The Gun Box”