Phil repaired the Boomershoot target steel someone (not a Boomershooter, it’s a long story) damaged with steel core bullets. This last weekend I tested the “target dog” he built for me. It was also the first time I had shot at the steel myself from further than about 75 yards. 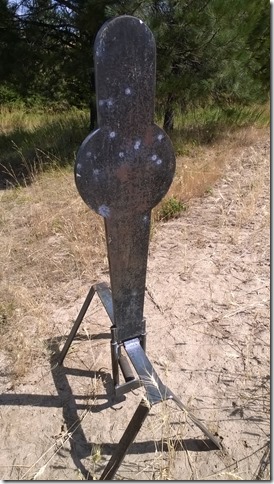 The target is 3/4” AR500 so they are not your standard pistol targets. They were intended to stand up to .300 Win Mag from 375 yards and beyond. The white splotches on the target above were almost all from 55 grain .223 FMJ bullets at 375 yards. They barely took the paint off and as near as I could tell did not rock the target backward. The spring, as Phil noted, is way too stiff for that. And I suspect that with a .223 and that massive of a target it’s physically impossible to select a spring such that a bullet strike would knock it backward such that a mild breeze wouldn’t also do that. The .40 S&W didn’t move the target either.

Notice the white stuff at the base of the target? That is lead spray from the bullet strikes on the target.

I was trying to zero my .300 Win Mag, without a spotter, from 375 yards and only got two hits as I probed different hold overs and unders. And the bullet splash on the steel was so small I couldn’t see it even with the 14 power scope at that distance. Here you see the impact from a 190 grain Sierra Match King bullet hitting the steel at about 2475 fps:

There is just the tiniest of craters there.

A hit on the edge of the steel is another matter:

The two .300 Win Mag hits weren’t particularly good to judge the knockdown potential of the configuration but as near as I could tell there was, again, no movement.

I’m extremely pleased with the crater repair Phil did. The targets look awesome! But we need to crunch some numbers to see if it is possible to choose a spring or maybe redesign the target dog such that it will be self resetting for a .30 caliber bullet at Boomershoot distances.