I took an almost new shooter to the range on Wednesday evening. John had gone with Ry once and shot a pistol but he wanted to learn about shooting an AR so off to the range we went with an AR and some ammo.

He did well. As we went through the dry fire exercises he said he was seeing double. There were two rear sights. One was above the other and he couldn’t seem to figure out why. I tried to duplicate it by moving my head around and changing the gun position some but was unable to.

I finally just told him to choose one and see what happened. He punched a bunch of holes in the paper in the expected places so I didn’t think about it much more.

After about 20 rounds or so there was noticeably more wobble in the muzzle of the gun. He rested a bit then finished off the last 10 rounds in the 30 round magazine.

As I explained to John because of the distance of the sight above the bore at close ranges the rifle is going to shoot quite a bit low. He shouldn’t worry about it now. Just aim at the bulls-eye and be happy if most of the bullets into nearly the same place.

They did. Notice the new shooter smile?

I put a target at 40 feet and put about 20 rounds downrange fairly rapidly to see where the bullets were going for me: 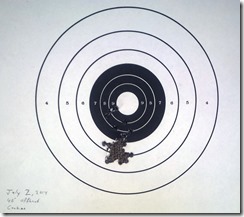 It was still shooting a little bit to the left but just a little higher than where John was hitting. I probably should tweak the windage a bit and verify where it is hitting at 100 and 200 yards but I think it is looking good for my uses.

After looking at the pictures I took a little closer I think I see why he was seeing double: 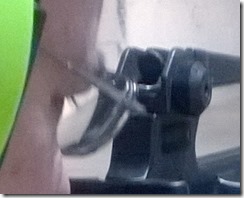 I looks like he was looking through the edge of his glasses. I wear a contact lens in that eye and that explains why I was not able to duplicate his issue. I’ll have to work on that with him.