Progressives are so violent:

I would like to know who the parents are of #kendalljones are- yes I do hope a pride of lions gets your whole family pic.twitter.com/sqN4IOoHoU 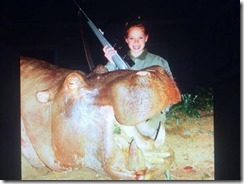 damn Kendall Jones you are one ugly murdering freak. I can’t wait till a lion declares war on your fake ass.

I hope Kendall Jones gets mauled by a lion. The evil, disgusting coward pic.twitter.com/kQy2uLm0yK

It appears to be in their nature.