Off and on for a couple years and then starting in during the week between last Christmas and New Years I have spent a LOT of time trying to get a good Internet connection to my brother Doug. I have a good connection at Boomershoot Mecca but Doug and his family are blocked by the woods behind their house from Teakean Butte which is the source of my connection. They have a satellite connection that cost a lot of money, is unreliable, has HORRIBLE ping times, and poor transfer rates.

The obvious answer is to put a repeater on the hill between Mecca and Dad’s place. But we don’t own the hill. The nickname we have for the owner is “Wicked Witch of the Boomershoot”. So you can imagine how well such a request might be greeted with. I wouldn’t be surprised if she complained about us transmitting electromagnetic waves over her property—if she knew about it.

Anyway the best we could come up with was putting a repeater on a hill I own 1.7 miles from Dad’s house. Yup. We go further way to get a better signal to Dad’s place.

The ordinary Nanostation2s should work for several miles under ideal conditions. But this isn’t an ideal situation. We are probably actually just out of line of sight. In December I couldn’t get things to quite work unless I chose a different hill which belongs to cousin Alan. We probably could have gotten permission from him but at that location we needed to have two Nanostation2s, one pointed toward Mecca and the other toward Dad’s house.

I ordered a parabolic reflector hi-gain external antenna and came back the end of February. And found to my delight that I had good signal strength with just the Nanostation2s, completely different results that when I had done my tests in December. I still wasn’t able to get a high bandwidth connection but I was pretty sure it was a configuration issue on my part. Doug purchased the equipment he would need to get solar power on my hill to power the Nanostation2 and I planned to come back in a few weeks and do my part with the configuration of the Nanostation2s.

I went back in April and again tried to get a connection. Now the Nanostation2s alone didn’t work. The signal strength was back to what I had in December which was too low to be usable. What is going on? I suspect some differences in the ground conductivity or something. I just don’t know for certain. Again I gave up for the moment.

This weekend with the help of daughter Kim, Jacob, and Jeff I did some Boomershoot cleanup, mounted more solar panels on Boomershoot Mecca, and took down a solar panel that Doug was going to use for the repeater. I then proceeded to do some more signal strength testing.

I put up a twelve dBi antenna (a Nanostation2 has a 10 dBi internal antenna) on my hill attached to a Ubiquiti BulletM2 (the same one I used at Boomershoot with great success) and with the parabolic (24 dBi) antenna on a Nanostation2 at Dad’s place was able to get good signal strength. But for some reason the bandwidth sucked. Probably a configuration issue I guessed.

Doug wanted to avoid mounting anything on the outside of Dad’s house so I moved the parabolic antenna to the BulletM2 on my hill and used the internal 10 dBi antenna on a Nanostation2 at Dad’s place. It should only be a 2 dB loss compared to the 12 dBi antenna we were testing with before.

Signal strength was good but the bandwidth was in the toilet. I’m talking throughput to the Internet on the order of 60 kbs download and 10 kbs upload. It has to be a configuration issue. I spent hours trying all kinds of things with no success.

I finally decided the BulletM2 on my hill had to be the problem. So Monday afternoon I put in a Nanostation2 in place of the BulletM2 driving the parabolic antenna: 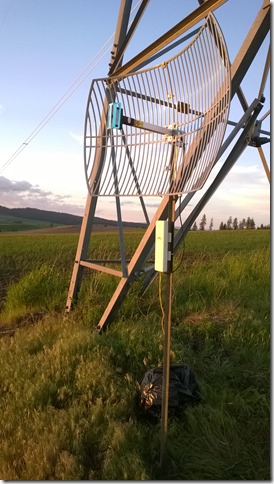 It worked. Just this minute I have 2.11 Mbps download and 0.68 Mbps upload from my computer through a WiFi access point in their house, a switch, five Nanostations (remember I needed to hop around the machine shed), the router at Mecca (two miles away via the Nanostation path), and to the outside world.

Tomorrow I bring my Verizon Network Extender to test out in their house. I’ll finally have them connected to the rest of the world in a civilized manner.

Update: Early (6:19) in the morning the connection to the rest of the world was less busy and I got this result:

Yeah. I’m all thrilled about something that is considered poor service by anybody in a major city but this is out in an area where it’s tough to even get cell service. Only Verizon and Inland Cellular even have a hint of service here. And then it is very spotty and intermittent. You have to travel at 20 miles, as the crow flies, to get service from AT&T or T-Mobile.

Their satellite ISP has an advertised (but never realized) download rate of 1.5 Mbs and upload of 256 kps plus a download data limit of 17 Gbytes per month. Ping times are in the 1.25 second range. If you watch a few movies and do a bit of web browsing you exceed that data limit. This is so much better and they will have a solid Verizon connection in their house in a few hours.

4 thoughts on “A new Internet connection”