If you were following my Twitter feed on Thursday you know we had a medical emergency onsite at Boomershoot. This was the worst event we have had in the 18 events we have put on. As usual it had nothing to do with the use of guns or explosives.

Scott K. was walking up the hillside to help pound stakes into the ground, went to his knees and then face first into the ground. From his perspective, as I heard him explain to the medic in the ambulance, he got dizzy then woke up with people standing around him.

From the perspective of Art, Brandon, Rebecca, and Tim Scott was unconscious for a couple minutes, taking only one breath every 30 seconds or so, with a weak and thready pulse that occasionally stopped or couldn’t be found. Then he took a couple large breathes, his pulse became normal, and he woke up.

I wasn’t there at the time. I had just arrived at Boomershoot Mecca when Art S. radioed me and said we had a medical emergency. Scott had collapsed and wasn’t responding. They didn’t have cell phone coverage at their location but since I was at Mecca with the Verizon Network Extender I did. I called 911 and told them what I knew. They dispatched an ambulance. I was at Mecca for a few minutes to make sure if they tried to call back for directions or something I would be able to receive the call.

After the first vehicle with a siren went by and appeared to find the location I headed back. By the time I arrived the scene looked like this: 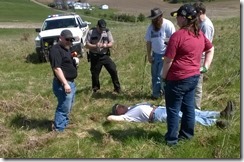 A sheriff’s deputy had arrived and was asking questions and handling communication with the ambulance. Scott was conscious and talking and said he felt fine.

A few minutes later an ambulance and another sheriff’s deputy arrived:

Not too long after that a full size ambulance arrived. The medic from the first ambulance then said they would transport Scott by ground and they could sent the inbound helicopter back.

Yeah. It must have been a slow week in Clearwater County for the emergency response team and they wanted something to do.

All kidding aside, Clearwater County did a great job getting to our somewhat remote site and taking care of Scott. From the time I started my 911 call to the time the first responder arrived was about 15 minutes.

The hospital did all kinds of tests and couldn’t find anything wrong. The high blood sugar reported by the onsite medic apparently was in error. Scott came back the next day and worked as if nothing had happened.