Authority Safes contacted me about reviewing one of the gun safes they sell. They wanted to give me a SentrySafe Quick Access Pistol Safe for review. Before I accepted it I told them that if I found something I didn’t like that I wouldn’t hold back in reporting that. They told me they wouldn’t want it any other way. That was a good start. I accepted the safe and played with it quite a bit.

I didn’t follow through with this post as quickly as I should have. I have had the safe since sometime in early February. It has been sitting beside my bed making me feel guilty every time I step over it to get into bed. So today I finally got around to doing the last of the tests I wanted to do and now I’m reporting everything.

First is the worst thing I have to say about the safe. As reported in this video review if you press the buttons too fast it won’t open. You have to try again. And “too fast” isn’t all that fast. I didn’t even have to try to have it fail. I have to deliberately slow down from what feels like a natural speed to me. But I may not be normal in this regard. Since I was in grade school people have commented on how quick I am with my fingers and hands.

The second worst thing I have to say about the safe is about one of its features. That’s right, it’s not a bug, it’s a feature! After not opening the safe for several weeks I tried to open it and it failed even when I did it slow. What? I know that is the combination. Oh! Now I remember. The first button push is just to get its attention and doesn’t count toward the actual combination. It turns on the backlight for the buttons and gives you low level illumination for entering the combination. I understand why they did this. It’s kind of a cool feature but it delayed my entry into the safe by several seconds. If I had just woken up and was in a high stress situation my brain might not have solved the puzzle nearly as quickly as I did this time. I would recommend opening it at least once a week just to keep your fingers and brain up to speed on the proper combination and speed of button pushes.

The third worst thing I have to say about it is that I am a little bit concerned about the back up lock. There have been reports of this type of lock being defeated with the barrel of a Bic pen. I tried some things but couldn’t find a plastic tube of the proper diameter. This concern is going to depend on who you are trying to keep the contents away from. If your threat model is small children then this safe is going to be great. If the threat model is a criminal with tools then the safe is probably susceptible, even if you utilize the supplied lag screws, to crow bar removal from your premises and a metal saw. If the threat model is a smart teenager with lots of time who wants surreptitious access then maybe you need to investigate further.

Now the good things I have to say.

It’s small enough it will slide under the bed and fit in a lot of drawers. It’s large enough I can get everything I can reasonably expect to need, short of body armor, that I might need in a quick access pistol safe.

The safe feels solid. I didn’t even have a temptation to try and pry or force things to gain access. I used to have a gun cabinet that just looking at it gave me the urge to apply a drill and a hacksaw blade to it. This safe did not tempt me in a similar manner.

I trust this safe to keep my grandkids and casual criminals out of it while giving me ready access.

Here are my pictures and further comments: 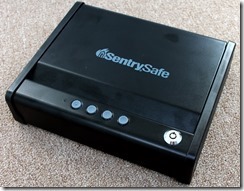 It’s a nice looking safe. There are no easy pry points. The dark smudges are from me handling it with oily fingers. The surface cleans up easily and I would not expect corrosion even if I were to put it in a moderately abusive environment. 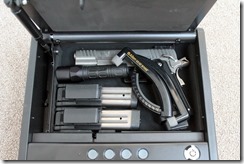 Above you see that I was able to put my loaded, cocked, and locked STI Eagle 5.1 with a 18 round magazine in the safe with room for two more 18 round magazines, in their holsters, a Surefire flashlight, and hearing protection. 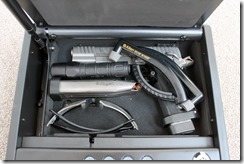 I think it’s a good safe for most home applications and recommend people give it serious consideration.

See also reviews by Say Uncle, Robb Allen, and their commenters. I didn’t watch the YouTube video linked to by one but I scanned it without seeing this particular safe.