Three weeks ago I made a trip to Idaho to work on some things for Boomershoot 2014. Contrary to the previous visit I was not able to drive in the 700+ yards to Mecca. There was a snow berm blocking the field road: 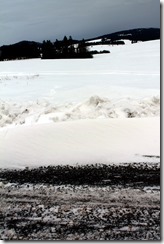 And had I shoveled it down to size the depth of the snow on the field road would have been problematic even with four-wheel drive and studded snow tires on all four. I walked in. 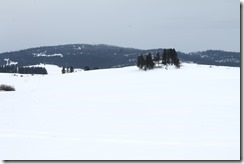 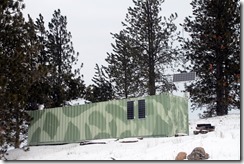 It was cold (16 F) and windy (with a wind chill factor of 5F) but that wasn’t a big issue except for the conditions in the portable toilet:

I did a bunch of work inside for several hours then I noticed my fingers and toes were getting cold. I wore gloves off and on and was able to keep the fingers at an acceptable temperature but the toes weren’t getting any better so I decided a trip back to the vehicle was in order.

As I was walking back I realized that if my visibility were to be sufficiently reduced by a blizzard or fog I could be in bad situation very rapidly. I was just walking across an open field. There was no road or trails to follow except for my foot prints from the trip out. A few minutes of drifting snow would fill those in. Cell phone reception is very flakey. I could easily get in a situation that I couldn’t even call for help. And if help did arrive at the road what could they do beyond blink lights and honk the horn? It wouldn’t be safe for them to try looking for me even if they thought they could find me. My phone GPS might or might not get a fix without the assistance of a data connection via cell.

Not too long after getting back to Seattle I purchased some radios that would allow me to connect with brother Doug on the frequencies he uses for the farm. They also work on the FRS frequencies we use for Boomershoot (Channel 13, Code 0). I have done the range tests but I expect they will have similar range to the portable radio he has which is many miles further than what I would need should I get into trouble at the Boomershoot site.

My concerns were without warrant and I made it back to my vehicle and did some Wi-Fi testing. I had installed a new antenna at Mecca on my previous visit but hadn’t tested it from the Boomershoot shooting line. I drove over to the intersection of driveway into the shooting area and Meridian Road. I had to buck through some snow drifts but they weren’t too bad:

The Wi-Fi signal was great! I could connect to Mecca with my laptop on Meridian Road without putting up another access point. My cell phone needed the extra AP though. With the extra AP I could connect just fine but I couldn’t get out. I found out, after I got back to Seattle, there was a little check box on the “Advanced” tab of the Nanostation 2 that needed to be unchecked. I made a big notation in my setup notes, “CLIENT ISOLATION MUST BE OFF!”

The driveway probably was passable but I walked out to the shooting line berm. 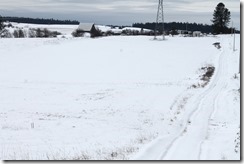 Barb and I have been anxiously awaiting for signs the transplanted daffodils (see also this blog post) survived the winter but today was not the day. Here is the downrange side of the shooting berm where we planted them: 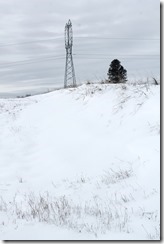 Things were looking good for Boomershoot 2014. The snow was well within normal limits. I talked to brother Doug earlier this week and he said 90% of the snow has melted now but it is still early enough that it could snow up again.