I arrived at Boomershoot Mecca at 9:00 AM on December 22nd to see this: 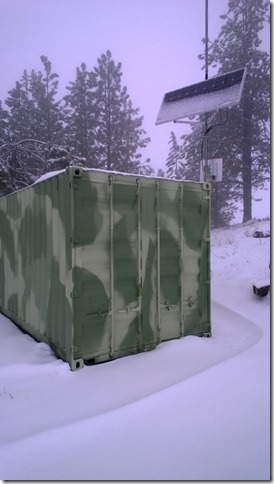 It was a little bit cold and very dark and dreary. I started the generator, turned on the lights and started work inside. I had a bunch of Wi-Fi experiments to do to see if I could get a connection to my brother’s house 1.65 miles away. This involved configuring several Nanostations and tromping across snow covered fields with a Nanostation, a battery, and fence post trying to get around the hills between the two sites with the fewest number of hops.

I also installed another inverter. I really need to organize all the wires better. I have the tie wraps. I just need to use them. 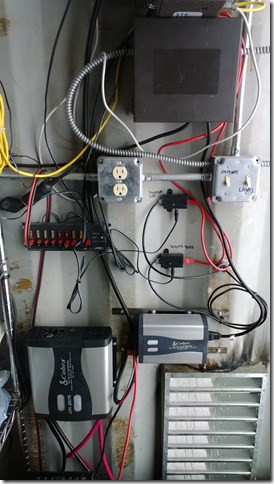 The new inverter is the box in the lower left corner of the picture. It can output 2500 Watts continuously. The batteries won’t last long at that rate (at over 230 Amps at 12 Volts I don’t expect much more than an hour) but it will allow me to run everything simultaneously if I really want to. This includes a new piece of surprise (for Boomershoot staff) equipment that consumes 1000 Watts all by itself but dramatically improves the speed of some operations during the production of Boomerite targets. Typically we run on generator power but for just building some test targets or testing production procedures the new inverter will let us do that without having a generator on site and without turning off the lights.

When I came back on the 24th it was literally dripping wet inside. This is a picture of the ceiling of the shipping container: 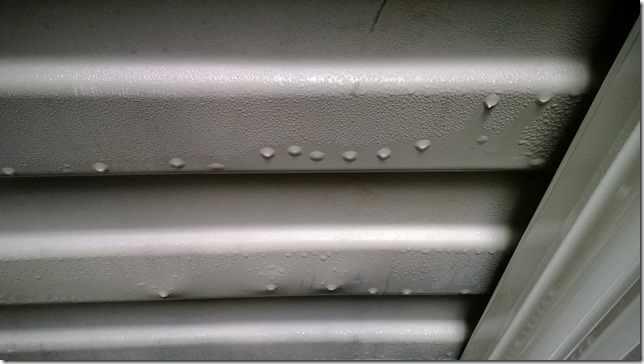 I need to spend some effort into deciding what to do about the condensation.

On Christmas Day the sun was bright and I observed the existing solar panel producing 121.5 Watts. The panel is rated at 130 Watts so I was a bit surprised that even with the low angle winter sun I was getting that much power out of it.

I installed some “windows” on the south side of the shipping container: 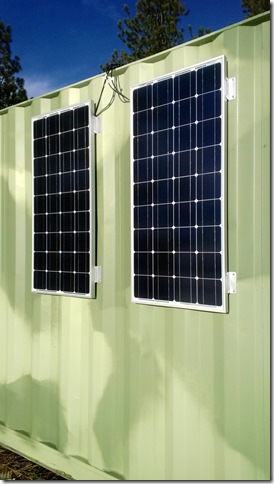 Not really. It’s two more solar panels. They are getting so cheap that I decided it was worth while to just install them vertical rather than spend the effort to mount them at the optimal angle.

I also drove the grounding rod another foot or so into the ground. I pound on it with a sledge hammer until my joints and muscle ache too much or I run out of time. I’ve made a lot of progress considering how hard and rocky the ground is there. It’s getting close to the proper depth. It’s an 8’ long galvanized rod and I think I now have only about 18” above ground.