This weekend Barb and I did some testing for a new Boomerite recipe. We ground up some Styrofoam peanuts in the blender. We blended the Ammonium Nitrate until it was a fine powder. Then we used the usual masses of the AN, Potassium Chlorate, and Ethylene Glycol. We added about a cup and a half of the ground Styrofoam and mixed it all together. 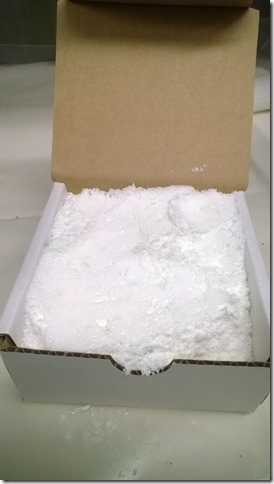 That is 300 grams of the mixture which nearly fills the 4”x4”x2” box. It takes 400 grams of conventional Boomerite for the same volume. The hope was that the finer particle size of the AN would result in a more rapid and complete chemical reaction. The AN is usually in prill form. When finely ground it does not detonate easily.

Our hypothesis is that the prills create air gaps and the supersonic shockwave from the bullet compresses the air which heats the chemicals to the required temperature for detonation.

The hypothesis being tested was that the Styrofoam would supply the “air gaps” and enable the detonation in the usual fashion.

As you might expect for the last day of November it was a bit on the cool side at Boomershoot Mecca. Barb’s clothing confirms that suspicion:

We took the test and control targets to the Boomershoot site and shot them with Stinger 22LR from 23 yards away. The two out of two conventional Boomerite targets detonated with a single hit. Zero out of six of the Styrofoam “enhanced” targets detonated. I then tried shooting them with 55 grain FMJ .223 American Eagle ammo from 23 yards away. Two out of ten detonated. Many of the others were “smokers”. They were close to detonating but weren’t quite over the threshold.

Barb finished off the four remaining conventional Boomerite targets with one shot each.

There are some other tests we could do along the same line. It could be we had too low a density. Packing the targets some might make a difference. We also have some hard polystyrene pellets (used for stuffing dolls, etc.) that might replace the prills. But I’m concerned they would not be consumed in the reaction and would be scattered all over the field. I expect the ground Styrofoam would just be fuel for the excess oxygen in our Boomerite mix and we wouldn’t have to worry about the potential for litter.