I bought this printer when I got my first computer in May of 1984. It’s nearly the identical age as my son James. And, appropriately, I stored it in James’ closet for many years before he moved out. From my discussion with him last night that was a bit of a sore point with him over the years. He told me he frequently uses the story about the printer in his closet of an example of me being a packrat or something. I’m not sure why he would think it is evidence of that but whatever.

As I was unpacking in my new Clock Tower residence I came to the printer and decided it was time for it to go to the great recycling pile in the sky. But it was painful. It still looks to be in pretty good shape. Barb L. offered to try selling it for me which eased the pain some. 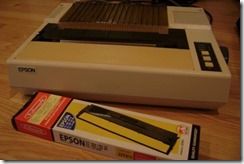