@davidhorsey at @latimes made the cartoon at the top. It is a gross misrepresentation of what actually happened. The poster at the bottom is actual political material from sometime during reconstruction after the Civil War.

Here is another poster created by a northern Democrat: 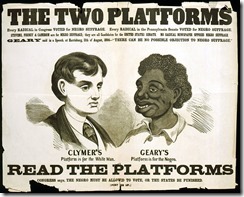 For more background on the Democrat’s political platforms from that era read this and this.

Now that racial bigotry is no longer fashionable Democrats have turned to prejudice and bigotry against gun owners. I don’t think it was a coincidence that as the civil rights movement of the 1960’s gained traction the anti-gun movement gained traction as well. The Gun Control Act of 1968 passed as a means of restricting access to guns by blacks.

Anti-gun people are the KKK of the 21st Century. There were members of the KKK that were tried and sent to jail decades after their crimes. The intervening years enabled prosecutors to find juries who would convict them. The criminals couldn’t imagine the political winds changing so much that they could be charged with a crime for beating or lynching a black man.

Today the anti-gun people who want us dead and actively pursue legislation to violate our rights cannot imagine they will ever be held responsible for their actions. But it is plausible we can do the same with the crimes these people are committing today. However unlikely it seems today it is still possible. And if we don’t work toward that goal then it won’t ever happen. If we work toward that goal we might achieve it. Opportunities will arise and we will take advantage of them to make progress on that path. The Internet is forever and the evidence will be there when the prosecutors decide to start enforcing the law.

6 thoughts on “Bigotry is alive and well”