The problem, he said, is that police do not have the authority, granted by a local ordinance, to enforce the law and inspect the safeguarding of guns at the homes of the 600 registered gun owners in town.

Fourth Amendment rights are apparently a mere discussion point because later he says, “There are civil liberty matters to consider”.

The real problem here is that they have a registry of a protected class of people. In this case it is gun owners but it doesn’t matter what the name of the minority or what the government justification for it is. Registries of Christians/Catholics/Muslims/Jews/Japanese/Germans/Italians have all been used for oppression someplace or sometime. A registry of a people exercising constitutionally protected right is a precursor to direct infringement of that right. Requiring the registration of those exercising their rights has a chilling effect on the free exercise of those rights and is unconstitutional.

In allowing himself to be quoted Barry Greenfield has admitted he is conspiring to commit felonies. He should review 18 USC 241 and 18 USC 242, voluntarily surrender to authorities, and sign a written confession. If he does I could see making a case for a good plea deal. Otherwise someday those words could be used at his trial. 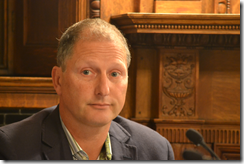 Thirdpower points out the slippery slope is real.

3 thoughts on “The problem is”