I was looking at some of the mining history in Idaho and found this:

Labor unrest was a problem throughout the district in the 1890s, and martial law was declared on two occasions. In 1899 labor agitators destroyed the Bunker Hill mill with a massive explosion of dynamite (Figure 35). Attempts, often successful, to destroy property were a favorite tactic used by union organizers against companies whose management was opposed to having unions at their mines. 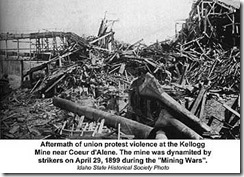 Business are frequently criticized for their oppression and violence against workers. Progressives/liberals/communists do not have any high ground to claim.