When it has a spectacularly successful bullet failure.Perhaps an explanation is in order.

I went deer hunting on Saturday, opening day. Brought the trusty old .30-06. Got up early, headed to a good spot while it was still pitch black (and raining, and blowing). The other guys I was hunting with headed for their respective starting spots, trying to get there before first light so we could watch for first movements, to be ready at first legal shooting time (6:40). My spot was a hillside overlooking a saddle that is a regular deer highway. It has logs from an old forest fire to hide behind, and lots of scrub Oregon white oak and some pines. I’d been sitting there cross-legged in the rain, trying with marginal success to keep the scope dry, waiting for something to happen down in the draw. It was only a little after seven when I heard something up on the hillside behind me. I turned around to my left and looked: a doe was passing behind me, headed further to my left, perfectly silhouetted against the skyline between a couple of oaks. Then another, and another. I started to bring the rifle around, when a buck stepped into the opening and stopped, looking at me because I was moving. I figure there was no good way to stalk or do anything fancy, so I just continued my awkward counterclockwise turn as smoothly as I could while I brought the rifle up. I got a good view of his antlers in spite of the raindrops on the lenses and generally poor light because of the silhouette, checked to make sure there were the three point minimum, and figuring he was close and I likely had only seconds (if that), I got the crosshairs on his chest and touched it off. BLAM. He jumped and ran, out of sight over the ridge crest, toward one of my hunting partners. I got up, secured my stuff, and went to find him. I thought that if I hit him where I thought I was aiming (low chest by the left foreleg) he shouldn’t go far.

No blood trail, but clear tracks in the freshly damp earth. (That is, they were clear when it got lighter, but under a heavy overcast early in the morning, I didn’t see squat.) I only knew the general direction he headed, so I headed that way, and I found him right out in the open on his left side. His right side looked pristine. I measured the distance from where I sat to where he stood: thirty yards. I measured to where he stopped, dead as a doornail; another thirty yards. So a .30-06 gave me a thirty (yard shot)-thirty (yard run).

I looked him over. Small mule deer buck, looking fat and healthy, with three nice and well-defined points on each side – no measuring eye-guards for counting this year! I looked at his right side closely, looking for an exit wound. I poked and prodded a bit, and saw one small bump. I pushed at it, folded the hair away, and revealed a reddish bruise-colored, hairless bump that felt like there was a hard lump underneath. I made a minute slit, and retrieved the remains of my bullet, caught under the skin. It weighs a mere 85 grains, and it started out as a 180 grain bullet. Can’t say that’s good, but I also can’t fault the overall effect in this case (dead fast).

When I gutted him out and butchered him, I found something weird that I’ve never seen before. The bulled entered his left from shoulder just behind the leg bone, went through his rib cage, grazed his heart, passed through part of his liver, went through the rear section of his rib cage at mid-height, and got stopped by the skin. The entry hole was normal size in the skin, but the shoulder behind is was blown up. It looked like a small explosive charge went off. Not just bloodshot tissue, but it sucked in a bunch of crud like hair and packed wads of it in between the muscle layers. I lost a five inch wide patch of muscle in the leg, and the hole in the rib cage was more than three inches across, with two separate ribs getting an inch long hunk vaporized out of them (well, not vaporized, but small fragments all over inside the chest cavity). The left lung was jelly. There was massively bloodshot lymph and fat a foot away. On the other side, the exit hole in the ribs was small, with no blood-shot tissue or waste. They thing that surprised me the most was the shear quantity of stuff that obviously wasn’t deer internal tissue that was packed in between muscles; there was so much I gave up trying to scrape it away and just cut away a fair bit of the gnarly-looking meat.

I think what happened is that the non-premium bullet (I think it’s an old Core Lokt) failed dramatically because of the close range. At thirty yards, it’s still moving faster than it’s designed for impacting at, and it acted like a high-velocity varmint bullet that blew up, causing a massive temporary stretch cavity that sucked in loads of hair, and the small bullet fragments dumped their energy in the first four or five inches of penetration, leaving only the smaller remaining core to sail on its merry way across to the other side. Trying a pink mist on a hundred fifty pounds of deer doesn’t work like it does on a groundhog, but the effects right around the impact point were pretty impressive. 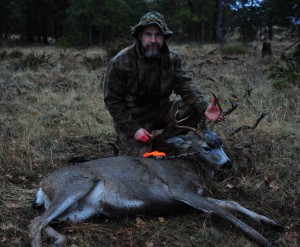 You can see the little pucker where the bullet bulged out and was caught at eight o’clock from the orange of my hunters vest.

Yet again, it is shown that hunting, shooting, and technical rifle accuracy may overlap, but they are NOT the same things. This shooting was more like high-intensity than the normal long-range boomer thumping. Only one shot, but it’s fast, close, awkward positions, poor light, and not a lot of time to ponder. In this case, “minute of deer (heart)” was more than 12 MOA.

The pictures and “autopsy” are here. Pictures include recovered bullet and bloody meat.