As I was unpacking at my new clock tower* Barb L. encouraged me to throw out old clothes. She told me, “A general rule is that if you haven’t worn it in over a year it’s time to let it go.”

I went to the closet and pulled out a sweatshirt. I told her, “I use a different rule than you. I bought this 40 years ago last month and I haven’t worn it in at least 20 years. I don’t plan on throwing it away.” She seemed to understand the new rule and there were no further discussions about it.

But then a while later she told me, “Okay. I’m going to take a picture of all your hats, gloves, and t-shirts. Then I’m going to post them on your blog and tell everyone to not give you any more.” “Why?”, I asked. She gave me a look that seemed like she was about to burst into some incredible snark but was exercising extraordinary restraint and said nothing. Women. You are supposed to “communicate” with them then they don’t talk even when you ask them questions. Whatever.

That was a couple days ago. Today I finished unpacking all my clothes and was thinking about what she had said. I decided I might be able to figure out what she was talking about if I spread the items out and took the picture myself. Here is a picture of some of my hats: 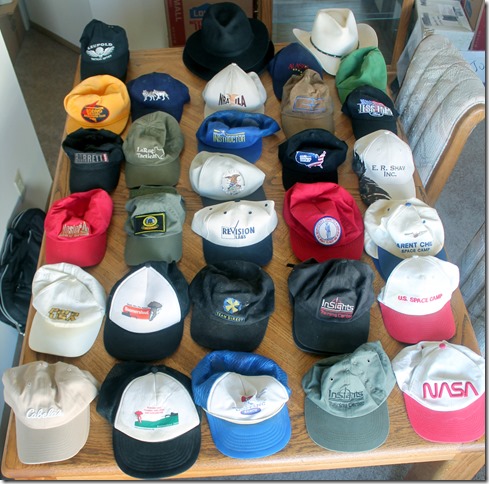 I think I understand now. She wants to be the one to give me new hats so I can express genuine pleasure at getting a new one rather than a duplicate of existing one.

* The view from the Clock Tower at my “neighbors” over two miles away through a 6X scope looks something like this:

30 thoughts on “I think I understand now”