You don’t get to be your own museum.

Barb L.
September 15, 2013
[I moved to a new clock tower today. I now have a clear field of fire into the lawns of homes over a mile away. It’s awesome!

I sorted through dozens of old boxes of stuff. Some of them contained stuff from 40 years ago. I’m a packrat and it’s difficult to let go of things. But I threw out garbage bag after garbage bag of stuff.

There were some things I had received from Microsoft that I considered historic. I help build Direct X and Windows Phone 7. I participated in the attempt at worlds record for the largest number of paper airplanes in flight at the same time and have one of the airplanes.

When I came across an artifact from the launch of Windows Phone Seven I wanted to pack it for the move. Barb was there and said to throw it. I started to explain how it was from the launch but she interrupted me with the above quote. 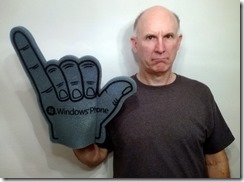 4 thoughts on “Quote of the day—Barb L.”