I took the boy sprout to the range for the first time today. It was beautiful, warm and sunny, the other sprout was off with a friend, the spousal unit was wanting some alone time, and it’s near the end of summer vacation, so it seemed like a good day for it. In some ways, he’s a totally typical boy – anything with water or dirt is great, and every stick is a sword, everything else it a gun, a tank, a bomber, or something that makes explody sounds for some reason. He’s always been interested in guns, and we have gone over the basic safety rules any number of times. So, off to the range it was. 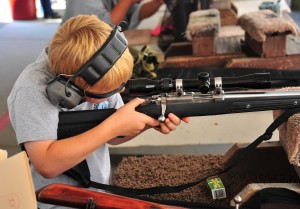 The range was somewhat crowded, and there were a lot of brass-flingers, but not overly much hit us from the SKS and M1A nearby. We started with the pump-up Benjamin BB gun (which got a few chuckles from down the line). Because the only rifle lanes available that were not next to LOUD guns were with the 30 yard target holders, that was the distance we shot at. He got the “finger off the trigger until the sights are on target” mostly down with BBs, then we moved up to the Romanian training mil-surp .22 with iron sights. He got all the shots on paper, and seven of the first ten in the black. Then the Ruger bolt action with the scope, and we alternated back and forth. He was wanting to rush, and shoot as fast as the sighs were on paper, rather than centered on target, but he still got them 90%+ on the paper. Interestingly, he liked the iron sights better than the scope. I don’t have a short-stock 22, so he had to hold it awkwardly tucked under his arm, with his head cocked over, but he still did pretty well. He took one shot with the 7.62×39, and put it in the black in spite of the awkwardness of the adult-sized stock, but that was enough of that for him for the day; no bruises, just not fun. Back to the .22s. After using about 150 rounds, I let him take a few shots with the 22 revolver. The trigger is really heavy in double-action, and he couldn’t quite do it, so he had to cock it and shoot single action. The RSO complimented him (though me) on his range behavior and safety, so it was a good and safe first time to the range.

I highly recommend having electronic earmuffs for new shooters, so they can hear your coaching without having to shout yourself hoarse.

2 thoughts on “Next Generation Shooter”