Of all of the things in Mom’s little box of recipes the only one I wanted was the one for rhubarb cobbler. The oatmeal cookies might have been nice and to know how she made pancake syrup might come in handy someday but I don’t think she had that one written down anyway. But the rhubarb cobbler is in a class of it’s own and I had to have it.

I’m pretty sure I got it shortly after Barb S. and I were married but I don’t recall ever making it. Rhubarb is not something you see very often in the grocery store and even though I think there was some rhubarb somewhere on the property of our house in Moscow I never bothered to actually pick it.

Last summer Dad gave me a bunch of rhubarb and the recipe but, again, I never got around to actually making it into cobbler. The rhubarb spoiled and I lost the recipe.

When Mom died I got the recipe again and this time I put it in OneNote on my phone. Barb L. called around to various grocery stores and found just one that had three packages of frozen rhubarb in stock. I drove over and bought them all. They sat in my freezer for months until I finally made it into cobbler a week ago today.

I shared it with Barb L. and her family when I went over for dinner. I warned Barb’s daughter that not everyone likes it. I told her my son likes the topping but the body of the cobbler isn’t something he would go out of his way to have. She tasted it and proclaimed it, “Delightful!” Since she is not the least bit shy about telling me she doesn’t want to eat the food I cook this was not her just being polite. It really is delightful.

Yesterday I bought another Pyrex 9”x13” pan when I saw it at a Goodwill store. I wanted it specifically for making the cobbler. I then went to three different stores before I found one that had rhubarb. I bought four pounds so I could make two batches.

Combine the topping ingredients in a mixing bowl and mix until uniform (about 30 seconds in my Kitchen Aid mixer). Spread evenly over the body of the cobbler. 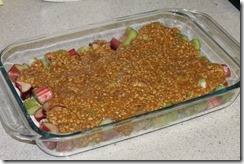 Bake for 40 minutes at 350F. The top should be slight browned and crispy. 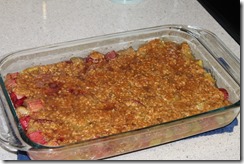 Let it cool before serving or serve hot in a bowl with a scoop of ice cream on top.