It’s easy to get bogged down in all the political stupidity and garbage going on in DC, as it slowly infects and infests the rest of the globe. But sometimes, you just have to get away. So, the other half, sprouts, the mutt, and I climbed into the minivan, and went out into the deep weeds.We headed for a ranch we know of, pretty well out of the way. The fishing pond looks a bit like a mud-hole, the deer, turkeys, and cattle are so numerous the dog almost got bored with them, and the quiet is broken only by natural sounds. (click for bigger)

The mutt got a lot of mousing and pouncing practice. Things bigger than rabbits she tends to be rather skittish around, and listened to “LEAVE IT” pretty well.

Experimented with taking pics of stars. I liked this one with both cool stars, a shooting star, and trees in the foreground that I shined my flashlight around on. 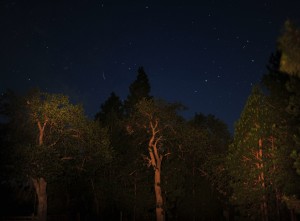 I also tried over-exposing on wider angle, and got the Milky Way, and another shooting star. And, of course, a whole LOT of stars, and the tops of trees. 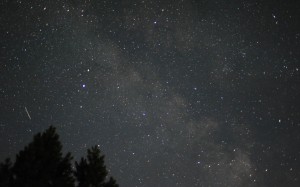 The wildlife was always fun to watch 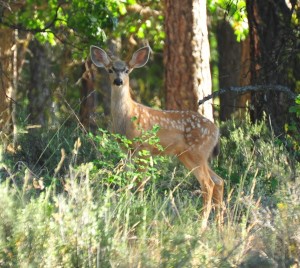 And sometimes we got both wildlife and the kids in one photo – he’s holding up something for me to see, and the blue heron we kicked out of the pond is in the top of the tree behind him. 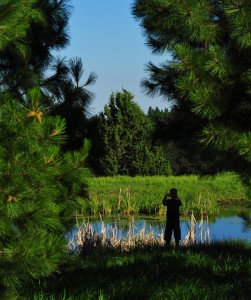 The fishing pond is also a water-hole for a lot of animals. And a bit of a mud pit. Well, more than a bit. I think the difference between a mom and a dad can be illustrated by the phrases “don’t fall in” vs “if you are going to get wet, don’t do a half-way job of it.” They spent nearly two hours doing WAY more work that I could ever get them to do for me, re-engineering a bunch of mud and pond-scum and cattails and stuff, in a place where the bottom was rather, er, vague, as to where exactly it was. 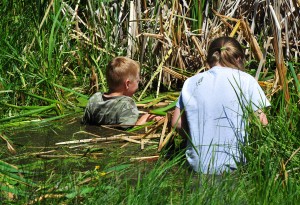 Later, they really got into it. Both of them up to their chins. Hosed them off later. Literally, we got out the hose, and hosed them off with cold well-water on the veranda. 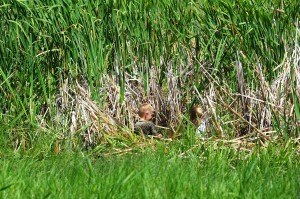 Went back later. Caught some small bass, first fish for either of them. Both of them caught a couple. Big sis is lending a helping hand. 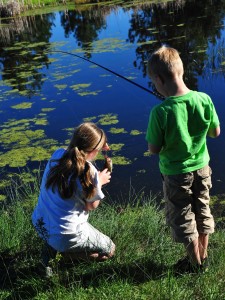 Later, he wanted to go back and try it again. Older sibling got bored, went to swing from the oak tree. He caught another one. This is unprocessed other than cropping and shrinking a bit – otherwise, it’s just how it came out of the camera. Note the moon. 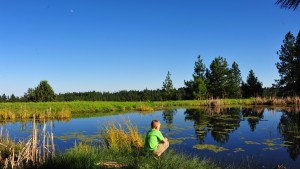 A good trip. Good food, quiet, temps in the high 80s to 90s, but humidity was in the teens, so it wasn’t bad. Cooled off nicely at night.

Some days, you just feel dirty reading the news. After a few days like this, you might be covered in mud and dust, but you feel clean mentally. Get out with the family from time to time, and leave the i-gadget and inter-tubes and the rest of it behind. Does a soul good.

2 thoughts on “An interlude from the cynicism”