Today’s post for The Stars Came Back was delayed by power problems. Specifically, this (click to embiggenate): 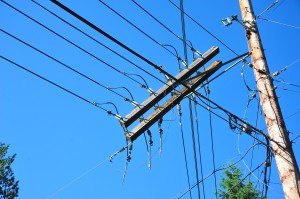 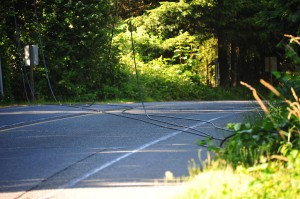 What’s wrong here, boys and girls? It seems that Novelty Hill Road was shut down for about 12 hours, starting at 4:55 PM 02July2013, because some wood failed. If you look closely at the right-side ends of the pair of 6″x6″ wooden beams hanging on to a couple bits of angle iron, you can see that the bolt that used to hold them to the power pole pulled through the end. You can also see the bolt that used to hold them on the pole, not holding anything. (You can also see a pair of wood-pecker holes lower down, but that may be the subject of a future post). When the beams fell out of place, a wire going across the road pulled free, crossed the three lower / outside 7200 volt wires, shorting them, causing them to arc, melt, and fall (still live) to the ground, right along / across Novelty Hill road (second picture; it’s a fairly major commuter road). A fire was started at the base of the wooden pole (creosote-covered wood burns pretty well) from sparks and arcing that went down something on the side of the pole. A nearby house got hit with a surge/spike, and the owner said “everything just hummed for a moment” then every fuse, circuit-breaker, GFI, power-strip fuse, fluorescent light, and a some electronics that were plugged in blew, big time. Blew as in totally defunct, needs replacement, black marks. Apparently, one or more of the falling 7200 volt wires fell across the line to his house. No one seems to have been hurt, though a person from another nearby house apparently had some of the falling / flying molten metal weld / melt itself into the windshield of her car, and some of the hood / roof panels got weld/melt/burn spots as she was sitting at the intersection right underneath the spot where it happened. I just heard a huge pair of BWAAAAAAANT! sounds, then the computer UPS started beeping and the lights went out. Fun times. Got the generator out for a while to make sure the frozen stuff stayed frozen, etc. Finally got power back around 5:30 AM.