Brad Huffman was my nephew.

From the Lewiston Morning Tribune: 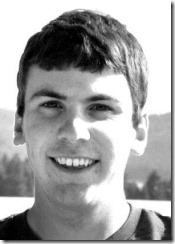 Our hearts were broken when our son, Bradley Ray Huffman, died in his sleep June 14, 2013, of natural causes. An autopsy is under way. He was born Nov. 21, 1990, in Lewiston, to Doug and Julie (Seeley) Huffman and two older sisters, Amy and Lisa. Brad grew up on the family farm in Cavendish, helping with the farm work from the time he could walk.

Brad attended Cavendish Elementary School before going to Orofino for junior high and high school. He won the OJHS geography bee in both seventh and eighth grades and participated in the state geography bee both years. He also won the District 171 spelling bee in eighth grade and competed in the regional spelling bee in Lewiston. He ran track for six years and qualified for state in the 800 meter three times. Brad was also involved in 4-H throughout his school years. He took several advanced placement classes in high school and graduated as a valedictorian of Orofino High School in 2009.

Bradley attended the University of Idaho and majored in plant science while working for the university wheat breeding program. He graduated in December 2012 and took a job in U of I mustard and canola breeding, although he was still involved with the wheat breeding team.

Brad enjoyed farming, gardening, photography, hunting and fishing. He returned to the family farm most weekends and enjoyed going for long walks with his dog, Kanobi.

There will be a service at 11 a.m. Saturday at the Best Western – Lodge at River’s Edge in Orofino, followed by a luncheon.

Pine Hills Funeral Chapel and Crematory is in care of arrangements.