Yesterday a new Huffman came into the world with the birth of my grandson. I joked on Twitter:

Happy times. I was going to Idaho to spend time with my Dad for Father’s Day and share pictures, etc.

I got a call from my brother Doug this morning. His son, Brad, died in his sleep last night. He was 22 years old. 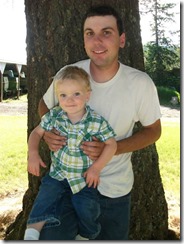 Brad Huffman with his nephew Jared.

He didn’t smoke, drink, or do drugs. No known health issues.

This is really messed up. This isn’t the way things are “supposed” to happen. He just finished college. He had a good job. He was considering taking over the farm when Doug and Gary retired.

As Barb L. pointed out when I talked to her about it, “It’s so terrible, one Huffman enters the world and another leaves.”