Barb L. and I took Jazzy and Maddy to the ocean with us this weekend. Jazzy had never been to the Pacific Ocean. I took a bunch of pictures of Jazzy and Maddy and made a simple video of them.

We had some dramatic moments when they went on ahead of us around a tight spot on the beach while the tide was coming in. Barb ran to catch up with them, almost fell (I caught it in three sequential frames on my camera), then yelled at them, “The tide is coming in. Be careful!” They responded with, “We know!” 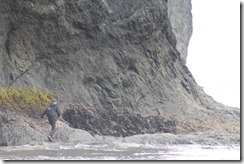 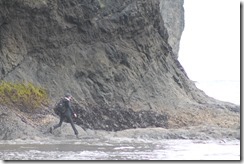 They then proceeded to continue on around the corner. We waited a couple minutes and watched with increasing concern as the water continued to cut off the “pass” between us and them. I then dumped my backpack and camera case and jumped between rocks over the water and ran around the corner to find them. They were another 100 yards or so beyond and about to go out of sight around another corner. I ran to catch up with them and yelled when I thought I was close enough for them to hear me above the waves, “You need to come back now!” I was concerned they might not heed my concerns either. But they responded and started walking back at a brisk walk. I ran back.

The “crossing” was almost unrecognizable as the place I had crossed maybe two minutes previously.

I stepped onto the closest rock and got my shoes wet up to just below the ankles. The hiking boots are water resistant and my feet remained dry as I waited for the wave to go back and I jumped across to another rock and climbed out the other side without getting wet.

Jazzy and Maddy soon followed and didn’t care all that much about the depth of the water because they had taken off their shoes much earlier (there is a tale to tell about the shoes too):

Maddy had tied her shoes to her backpack and then walked probably a mile or so before noticing that one was gone. We were able to determine, roughly, where she lost it because of all the pictures I had taken of them. But we figured the shoe was completely gone because the beach was about 100 yard narrower in that spot than when she had walked by earlier.

We were approaching the trailhead when Barb and I started thinking about making an improvised “shoe” for Maddy to walk the 3/4 of a mile or so on the gravel path back to the car. We had just concluded a t-shirt with a  plastic bag wrapped around it held in place with a rubber band would work or maybe just have her wait at the trailhead while someone went back to the motel and come back with her other pair of shoes. Jazzy and Maddy were probably 75 yards ahead of us when we saw one of them point and then they both started running. “A race?”, I asked Barb. “I don’t know”, she said. A few seconds later we understood as Maddy picked her shoe up off of the beach. It was on the edge of the water and probably 75 yards inland from her path in the other direction. The two socks she had stuffed in the shoe were still there too.