Someone is putting up posters on Capital Hill near Seattle. This is an area that has a demographic that is considerably more gay than other areas. Here is a sample: 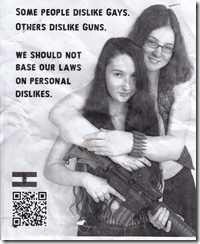 The QR code takes you to www.a-human-right.com.

It’s hard to know who’s responsible for putting the posters up all over Capitol Hill. “Nale Dixon,” who’s credited for drawing the cartoon of the gay couple, returns no search results online. The pro-gun website is run by a dude named Oleg Volk, “An American,” but that doesn’t necessarily mean he’s responsible for papering the hill with them. Without someone to credit, it’s impossible to glean the posterer’s intentions.

Perhaps being courted by a traditionally right-wing, conservative movement is refreshing and progressive, but it could also just be really effective concern trolling. What better way to make people feel unsafe in gay-friendly Capitol Hill than by slyly referencing homophobia and hate crimes in pro-gun propaganda plastered on every street corner?

Wow! It’s “impossible to glean the posters intentions” without someone to credit? Are we two worlds each speaking a language the other cannot understand?

They see someone pointing out the utility of being able to defend yourself using a firearm as being “concern trolling”. Would they think the same of advertisements for self-defense classes teaching Kun-Fu instead of Gun-Fu?

The comments are pretty “good” too:

7 These posters are tone deaf to the point of being offensive. I don’t appreciate my rights and concerns being exploited to make a ham-fisted point about gun laws.

15 It’s not that strange when you remember that the “traditionally conservative movement” in question is not in fact an organic movement but an industry lobby group with a lot of deeply emotionally invested fans/customers. These aren’t campaign posters; they’re advertising.

23 Oh, for crying out loud. The joke is on you. This is akin to the anti-gun ads masquerading as pro-gun ads by encouraging women to arm themselves to protect their reproductive rights. The intent here is to point out to pro-gunners that they are arming everyone, not just those who agree with them.

Are these guys in need of psychiatric help for their paranoia or is there that big of a cultural divide? In any case that they see simple messages such as these as some sort of capitalistic/right-wing/homophobic plot it means I’m not sure we actually have a common basis for communication.