Remember when the control freaks announced they wanted background checks for the sale of explosive powders after the Boston Bombing? This, of course, was aimed at gun owners. Not real terrorists because real terrorist could easily find substitutes. Gun owners could not.

We now know the explosive powder the villains used: 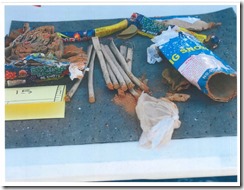 Yup. That’s right. They disassembled fireworks and put that powder in the pressure cookers.

So now I wonder… Who will the control freaks seek to punish now? Will they want background checks on anyone that buys fireworks?

Never mind. Those were rhetorical questions. The Boston Bombers (WeaponsMan calls them “Speed Bump” and “Flashbang”—I like!) were just an excuse. Gun owners are the real targets and it will still be the gun owners they seek to control.

6 thoughts on “Who will they punish now?”