Brother Doug was going through old photo albums and other stuff and came across this picture: 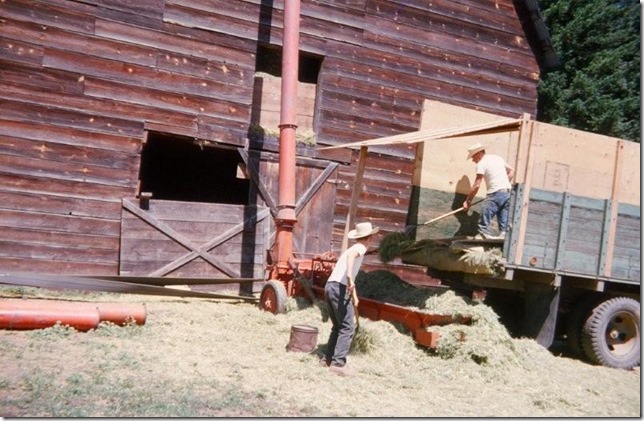 He sent it to me and asked what tractor was used to power the hay blower and whether it was the ‘51 or the ‘53 truck in the picture above. The two people in the picture are our dad (in the truck) and me (on the ground).

I gave him my best answers. “I’m pretty sure that is the ‘51 truck” and “I think we might have borrowed a tractor to power the hay blower” (see the large, flat, belt leading off to the left of the picture?). Doug was able to confirm it was the ‘51 and found another picture of Uncle Alden’s tractor with a flat belt attached to it near the barn.

What is more interesting to me is that while I remembered putting up hay like this for several years the picture brought back surprisingly vivid memories. I can almost smell the hay, feel the rock salt in my hand from the rusty bucket at my feet (we added salt to dry out the hay and reduce the risk of spontaneous heating and fire), and hear the sounds the hay blower made as it pushed the hay up the pipe into the barn. It’s very, very vivid. It’s very close to real even though it was probably 45 years ago.

The next time I go back to Idaho with Barb L. I should take her on a tour of the barn in the picture. The hay blower is still inside.

5 thoughts on “I can smell the hay”