By most accounts Boomershoot 2013 was good. Two people even came up to me afterward and told me, “This was the best one ever.”

I give credit to all the staff who showed up early or on time, knew what to do, and worked long hours.

There were some disappointments from the participant side.

The targets for the high intensity events had a very low detonation rate. My guess is that fewer than half detonated. The air should have been filled with so much water vapor that people would have difficulty seeing the targets. 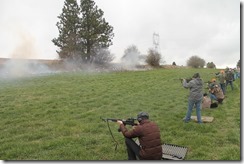 The detonation rate for the main event was better but still below what we have come to expect.

The low detonation rate was at least 90% responsible for the disappointing fireball this year.

We have more tests to do but the best hypothesis so far is that the heat guns used to do the shrink wrapping of the targets overheated the ethylene glycol in the Boomerite and evaporated a significant portion of it. Our tests were done in the winter and a lot of our target production was done when it was very warm in the shipping container.

The weather wasn’t bad. It could have been better though. On Sunday the winds were high enough that some people reported 10+ feet of windage was required for .223 calibers at the tree line 380 yards away. It’s crazy to expect to get hits on a 4” square target when you put on that much windage. 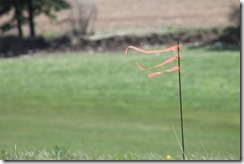 On the good side, at noon we moved about 150 or 200 7” targets from the distant hillside to the tree line. The original targets at the tree line were 3” and 4” square. The addition of 7” square targets was very popular with the shooters and there was a great deal of excitement as the targets detonated in rapid succession. The difference between hitting 2 MOA and 1 MOA targets is huge.

As usual there were interesting people and equipment at Boomershoot: 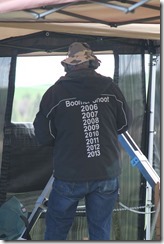 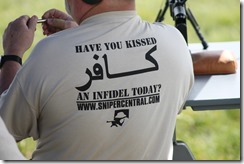 Most of the staff left about 5:45 PM. Daughter Kim and Jacob left sometime after 6:00 PM. I puttered around Mecca putting things away, taking down the tent, and packing stuff into my vehicle for the return trip to the Seattle area the next day. I left via the tree line at the Boomershoot site and spread the remaining coals from the trash fires to cool. I left at almost exactly 8:00 PM. It was still light out which was a first. There have been times, like last year, when I did not leave until after 11:00 PM.