We have long known that anti-gun people openly show their hatred for black rifles and handguns while sometimes giving lip service to tolerating rifles with light brown colors and silver colored handguns. But did you know they also have a bias against black ammunition too?

On March 12, 2013 the Board of Supervisors of the City and County of San Francisco passed an ordinance stating:

It goes on to list exceptions for police, military, and a few other “special people”.

But how are you to know if your ammunition “has physical properties resulting in ballistics performance identical to…Winchester Black Talon”? They, sort of, have an answer to that:

The San Francisco Police Department shall prepare or cause to be prepared a public database of brands and product lines of ammunition meeting the definition of “Prohibited Ammunition” in subsection (a). Failure of the Police Department to create or maintain such a database, or the omission from the database of a particular brand or product line of ammunition otherwise qualifying as “Prohibited Ammunition, under subsection (a), shall not be a defense to or otherwise excuse a violation of this Section.

What? Even if your ammo is not in the database that cannot be used as a defense? Then how can you possibly know if you are breaking the law?

It gets even more interesting as C.D. Michel points out (emphasis added):

NRA’s lawyers then obtained this letter from the San Francisco Police Department (SFPD). The letter confirms not only that the the ordinance doesn’t ban hollow-point ammunition, in fact, the new ordinance applies to virtually no ammunition. The SFPD letter clarifies that ammunition must be “identical in all ways” to Black Talon in order to be prohibited under the new ordinance. Black Talon itself has been out of production for nearly two decades. Ammunition experts have reviewed the SFPD’s position, and confirmed that there is no current production ammunition that is identical in all respects or performs identically in all ways to the Black Talon cartridge. So the City’s ordinance basically applies to nothing – save for those few left over Black Talon cartridges that may still be in circulation.

This would all be funny, in a pathetic sort of way like laughing at the 10-year old kid so dimwitted they can’t tie his own shoes, if it weren’t for the fact that the imbeciles making this law can have you thrown in jail for six months and/or fined $1000 if you violate it.

In case you weren’t involved in the gun rights movement 20 years ago Black Talon ammo was on most of the television “news” shows with animations showing the expanded bullet behaving, and described as, “a buzz saw” going through a human body. Never mind that the twist rate of the barrel, for say 9mm, is on the order of one turn for every 18 inches of travel. Hence the bullet spin is so slow it it wouldn’t even make a single turn going completely through an average sized person, let alone act like a buzz saw.

My guess is that the San Francisco idiots were having drug induced flash backs and remembered “Black Talon” and decided to “do something”. The thing is that Winchester was just a little too fast for them. Those San Francisco law makers are more than a little slow. Winchester beat got the drop on them by about 20 years.

What happened, 20 years ago, was that as a result of all the negative publicity there were people in congress writing up bills to ban the ammo. This was the dark ages of gun ownership and there was a good chance they could have gotten the votes to do it. Of course the sales of Black Talon exploded but Winchester did what was probably the appropriate thing even though they had a hit product on their hands. They discontinued it. They then replaced it with what they called “Ranger” which was also “SXT”, just like the Black Talon ammo. This had the politically acceptable jacket color of copper instead of black. They also put “Law Enforcement” on the boxes but the gun shops were happy to sell it to you and probably even bumped the margins a bit in the process.

Winchester said the SXT name stood for “Supreme eXpansion Technology”. But the people in the gun shops would tell you it really meant “Same eXact Thing”.

The media and anti-gun legislators, dolts that they are, didn’t catch on. I don’t know if they were fooled by the politically correct coloring or couldn’t understand the meaning of “expansion” but they left the new ammo alone.

I have a strong tendency to buy banned books and guns. And it should be no surprise I also bought, what I thought would soon be, banned ammo. I still have a box of the evil Black Talon in 9mm I bought from Lance who was my local gun runner: 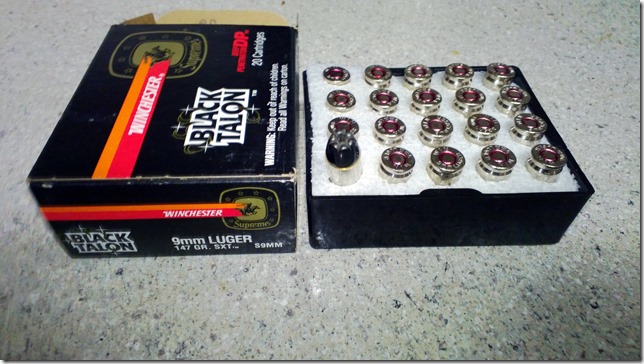 If the Board of Supervisors of the City and County of San Francisco want them they can come and get them. I’ll be glad to let them have the evil black bullets. I’ll keep the box and shell casings with me.

Update: Wikipedia has the story on famous shootings in which Black Talon ammo was used.

6 thoughts on “It’s black it must be evil”