Last night I found myself in a town conspicuously like my home town – the place I spent the first 18 years of my childhood. I was up against a sniper. She was a Chinese woman; determined (“Hell-Bent”, even). She was wearing the classic Cultural Revolution style, plain O.D. jacket and plain O.D. hat, and she had a rifle. I think that’s her on the right, but she’s younger in this photo; 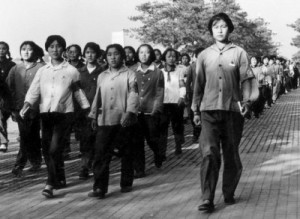 It started out with her trying to snipe me from some distance (I hate it when that happens) but it ended up as a running, ducking, hiding, urban-style shootout from about 150 yards. I took a couple of rounds but were superficial hits. I thought I had nailed her good in the end. Through my low magnification, illuminated scope I saw her go down just as she was trying for cover.

I spoke about the encounter with some of my friends, showing them my bullet wounds, which had healed to the point of being mere scars, and explaining what had happened, pointing out to them my now perfectly innocent-looking enemy. Funny what the light of day can do to a person that was trying to kill you just a few hours ago in the cover of darkness. I saw the woman a few times that day, and both she and I were pretending nothing had happened the night before. Neither of us wanted entanglements with law enforcement or other authorities, knowing that such would be the undoing of us both. This had become a chess game. We were going to have to settle our differences later…

I don’t remember many of my dreams lately, and would certainly not have remembered this one except for something my daughter said to me this morning at around 06:00 that triggered the memory.

1 thought on “Slugging it out with a “cell of one””