Barb L. and I spent most of the day working at Boomershoot Mecca. We (mostly she) folded hundreds of the boxes we use for targets and stacked them on the new shelves: 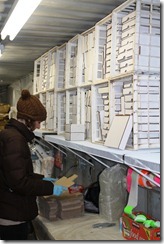 We also put in more of the supporting brackets for some of the shelves where they were a little weak. They are awesome now!

While Barb was folding boxes I finished grinding (Kitchen Aid blenders rock!) the last of the Potassium Chlorate that was of the wrong particle size. It isn’t as good as it comes from the factory but it is good enough that we can used it for the high intensity event where the bullet velocities are so much higher.

We tested the targets I made the last time I was on site and were stored for several days with the new packaging method of putting the Boomerite directly in the cardboard boxes then sealing the boxes with heat shrunk plastic on the outside of the box. Six out of seven targets detonated exactly as expected. The seventh made a half-hearted pop that spread the contents all over the snow. That sometimes happens anyway so I don’t think the one sort of dud can be attributed to the packaging technique.

All systems are go for the new packaging method.