As I was riding the bus into downtown Seattle to go to work this morning we stopped at Yale and Stewart for a traffic light. Initially I thought there were gunshots close by. Then as I did a “playback” in my mind and observed the subsequent sights and sounds more carefully I realized the flashes were white. Muzzle flashes are red/orange. Multiple explosions? But the flashes from explosives I am familiar with are reddish too. I was on the far side of the bus from the source but I ultimately located the origin.

A NW bound truck on Yale had tangled with a power line, and broken a power pole holding three transformers. The sounds were the breaking power pole, arcing of the power lines, and the exploding transformers. The truck stopped for a bit then left. Our bus remained stopped at the intersection and most of the passengers exited out the rear door and walked around the intersection. Some stupid and/or ignorant people walked OVER the downed power lines. At least one person turned around and took a different route after I yelled not to walk over the wires. 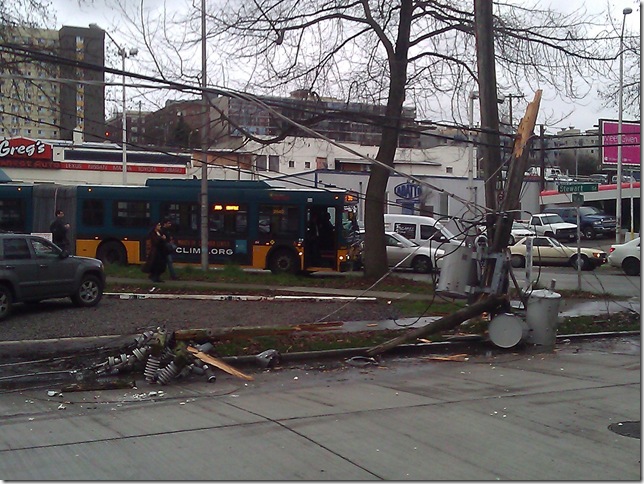 The bus in the picture above is the one I was on.

I was late for a meeting at work.

Update: Ry sent me an email with this link to the news story.

6 thoughts on “My morning adrenaline rush”