Or KH waves, or a KH instability. It’s a result of two distinct layers in a fluid traveling at different velocities. You’ll see it in rivers and streams, between bands in the atmospheres of Jupiter and Saturn, in your coffee cup, etc. In this case it’s made visible by the bottom layer being cloud, interacting with a clear layer above. The wave pattern extends from one side of the photo to the other. I had to darken the image a lot to bring out the detail. Through my polarizing glasses the waves could be seen curling in on themselves more dramatically. For really good detail in sky photos you need a polarizer, and probably a UV filter too, but my little point-and-shoot isn’t set up for such things. These KH waves are over the Clearwater River canyon above Lewiston, Idaho, seen from the south end of Moscow on my way to work the other day. 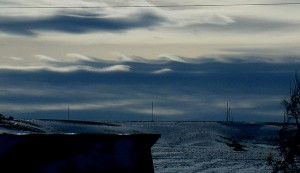