I say the prosecutors should show some compassion and only ask for a moderate penalty in this case:

In a nationally televised interview examining the place of gun control, NBC’s David Gregory may have violated the District’s gun laws. 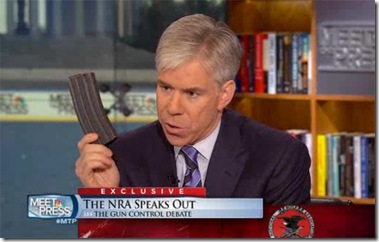 I had difficulty tracking down the punishment but it appears this could be the potential outcome (DC ST § 22-4515):

Any violation of any provision of this chapter for which no penalty is specifically provided shall be punished by a fine of not more than $1,000 or imprisonment for not more than 1 year, or both.

(a)(1) If 2 or more persons conspire either to commit a criminal offense or to defraud the District of Columbia or any court or agency thereof in any manner or for any purpose, each shall be fined not more than $10,000 or imprisoned not more than 5 years, or both, except that if the object of the conspiracy is a criminal offense punishable by less than 5 years, the maximum penalty for the conspiracy shall not exceed the maximum penalty provided for that offense.

Say Uncle (with more links here and here) and Sebastian also have some thoughts on the topic.

10 thoughts on “Show some compassion”