Last Friday the NRA responded to the Newtown shooting with a proposal “to help make sure this never happens again” that included attacks against video games, violent movies, and called for an active national database of the mentally ill and armed police officers in every school.

As I mentioned in a Tweet at the time, “Way to go @NRA. Trash the First Amendment in an attempt to save the Second. We all lose.”

And alienating all the gamers? Grrr… Now that was a big mistake.

One could go on to criticize the police office suggestion as well. How could they be paid for? Wouldn’t they just be the first ones shot in a similar attack? Isn’t this another step closer to a police state?

And a national database of the mentally ill? That’s not going to encourage people to get help or for family and friends to feel good about pushing someone to get treatment. Way to alienate still another group of people that don’t need to be alienated.

Even traditionally strong supporters of the NRA had some criticism of the NRA statement.

How can an organization that urges “Vote Freedom First” take a swing at video games and violent movies and hope to be taken seriously? 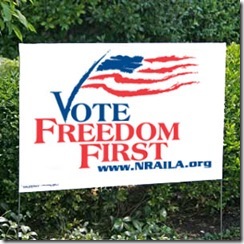 It’s like they are hopelessly confused or even incoherent.

On the other hand there are people saying (H/T to Sebastian):

Suddenly, the gun banners had to argue two ridiculous positions. The first was that allowing trained educators or police having weapons in schools is a danger. The problem is that people generally like and trust teachers and cops. The second position was even worse, that armed personnel or police are somehow utterly useless against untrained, amateur creeps who seek to confront six-year olds. All over America, millions of parents noted how none of the wealthy gun banners were disbanding their personal security teams and thought, “You know, I think I’d like having a cop around my kid too.”

Particularly amusing are the liberals who transform into green eyeshades misers with the public purse when it comes to cops in schools. The folks who can’t spend enough dough on fudge-smeared, patriarchy-challenging performance artists suddenly become thrifty Scotsmen when it comes to doling out a few shillings to put a cop on campus.

You know, he does sort of have a point there. Instead of pushing for the banning of guns or magazines our opponents have been deflected onto other topics. And that might just put us into an easily winnable position.

I don’t know if it that was befuddlement or brilliance but in the short term it just might have been a winning play.

5 thoughts on “Befuddled or brilliant?”