My G20 quit feeding properly last summer, and I identified the problem as an original recoil spring that had gone soft.  A new Wolf spring and steel guide rod took care of that.  Then I wanted to try a new Lone Wolf barrel because I was getting so much case buldge that one use was about all I was comfortable with, and the LW barrels have more case support at the bottom under the case web area.  They also have standard cut rifling, which is supposed to better for cast lead bullets– something I’d like to try at some stage.

My first tryout of the new barrel led to a failure to feed the very first round, but after that it seemed to function normally and I figured all was well.  Not so fast.  Those were previously fired cases.  Last time out, with all new cases, I had several failures to feed, and had to bump the back of the slide to get it into battery.

This morning I tried feeding some rounds from several full magaxines, and here’s what happened; 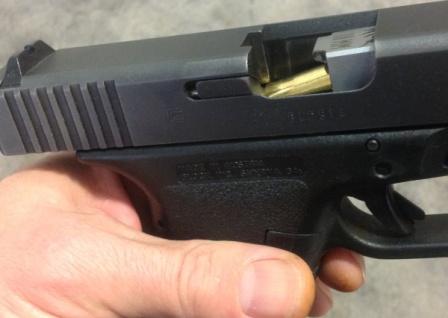 Above is the slide resting quite securely, with its new, beefier recoil spring, on a jam.

Below, I’ve removed the magazine and locked the slide back.  That round is still wedged in the back of the chamber, and it took some fiinger pressure to dislodge it; 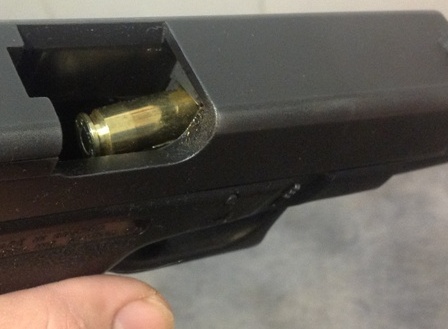 (Below) you see the mark below the case mouth, from the front of the feedramp digging into it; 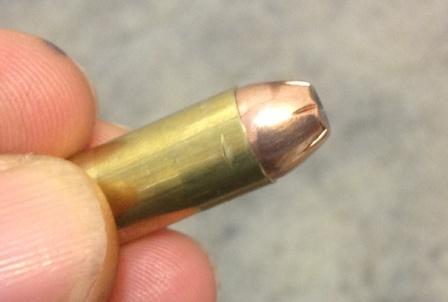 My theory is that the new, softer cases are getting bitten more deeply than the work-hardened fired cases I tried the first time, resulting in more problems.  The original Glock barrel has much more “throating” or relief at the feed ramp area, which is why the Glock barrel is said to have less case support.  The LW barrel has more support in that area, but for now it doesn’t have enough clearance to feed reliably.  My new StarLine cases are trimmed at the factory to only a few thousandths over the minimum, and about 7 or 8 thousandths under the maximum case length.  The overall cart length is exactly, to within two or three thou extreme spread, what the Hornady manual (and several others) called for.  The rounds plunk right into the LW chamber with the barrel removed, but jam in the chamber when fed from any of several magazines, due to the feed angle and the tighter (actually just longer at the bottom because of less throating) chamber.

A longer bullet ogive might force the front of the cart down as it feeds, but at the moment I don’t know if that would help or hurt.  I might just put the perfectly good old barrel back in and live with super short case life for now.

I spent 30+ years doing custom work on various types of musical instruments, and long ago came up with an axiom I have repeated many, many times to perspective customers and fellow shop workers;  When you divert from the original design, expect a cascading series of unforseen problems.  In other words, expect to pay through the nose as we may have go back to the drawing board a time or two, to find ways to accommodate your custom thingamajig, making it work seamlessly with the rest of the system.

I noticed just yesterday that Brownell’s, I think it was, or maybe it was CTD, had a bunch of LW Glock barrels in a promotion, for all the Glock models except the 20, or those in 10mm.  This kind of sucks, because I was having a ball late in the summer shooting silhouettes at 100 yards.  The original barrel never seemed to give enough accuracy to make that a reasonable proposition.

12 thoughts on “Not Glocking so Glockily down the Glocky trail”