Late last month Max and Barb had watched part of a USPSA match I participated in. I introduced them to Anette and Charles but had not been able get to the range with them for their own trigger time.

Today I took Barb and her son Max to the range. Max had done some shooting before but not a lot. Barb said she might have shot a gun once when she was about 12 years old but couldn’t remember for certain. 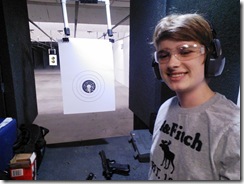 Max’s previous experience showed. This was with the Ruger Mark II from about 10 feet away. 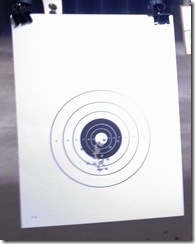 This is Barb’s first target. Again with the Ruger Mark II. I would include the picture of her smile but she had her eyes closed.

This was good for a first time shooter. She was having some problems with the follow through and pulling the gun low for a bit and after we got that corrected the group moved up and got a lot tighter.

One of the first things she said after shooting the first target was, “This was more fun that I thought it would be.” 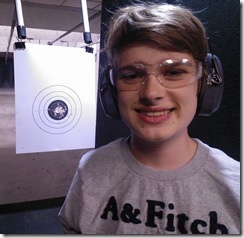 This is Max with his revolver target. He shot it single action for a couple cylinders then shot it double action. All from about 8 feet away. I was impressed. My little S&W Air-Lite only has a 3″ barrel.

This is Barb with her revolver target. All single action. Very nice! Excellent for a new shooter.

We left a little early because the people in the next bay were shooting a .44 Magnum. It was a little unpleasant for us.

As we were driving away for lunch Max invoked Markley’s Law over the guy with the .44 Magnum. I gave them the history of Markley’s Law. They had not heard of it before which isn’t at all surprising. They hadn’t heard of Godwin’s Law either so I briefly brought them up to speed on that as well.

The next planned shooting excursion for Max and Barb is a trip to Idaho for a private Boomershoot party on the 20th of this month.