H/T to JoeyD Sr. for the email. 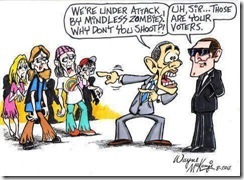 I got a laugh out of this even if the zombie meme is wearing thin and I don’t really think of Obama supporters as being mindless.

To think of Obama supporters as being mindless is to underestimate the intelligence, power and resourcefulness they have. Many may indeed be little more than “useful idiots” but there are also those that believe they are the intelligent ones that “should be in charge”. They understand politics, psychology, and sociology well enough to be dangerous and frequently have the mindset such they don’t have a problem being extremely dangerous to their political opponents. All with the best intentions for the greater good of course.—Joe]