Today was the first range day for the Gun Blogger Rendezvous. I pretty much ignored everyone at the range today. I had a rifle that I needed to zero and test and Barron and I did little else.

At 200 yards I was disappointed: 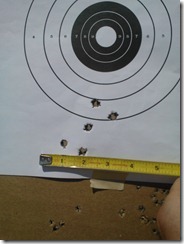 My Spud Gun will yield a group about one third this size at this range.

I zeroed it and put the results in my ballistics app for my phone (still under development, not yet available).

We first started shooting at the barrel. It seemed that we were hitting all around it. I finally moved to the plate. It was smaller but I wanted a hard target. CLANG! First shot hit. The next shot was a miss, then two more hits. Barron then took a few shots at the plate. He did well too.

We concluded that we were poking holes in the barrel and seeing the dust kick up behind the it. We probably had a lot of hits on the barrel but just couldn’t be sure.

Still, getting three out of four hits on the plate with this gun was confirmation it is a good enough for most social occasions.

The long range results are similar to my previous attempts at the same target.