I didn’t know there was this much interest in the history of underwear:

A revolutionary discovery has hit the world of underwear: Women 600 years ago wore bras.

The University of Innsbruck said Wednesday that archeologists found four linen bras dating from the Middle Ages in an Austrian castle. Fashion experts describe the find as surprising because the bra was commonly thought to be little more than 100 years old as women abandoned the tight corset. 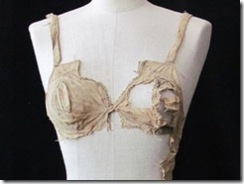 I have always wondered about the motivation for bras. I’ve always been skeptical of the claim that “it hurts to have them bouncing around unsupported all the time”. I can see that being an issue once a woman wore a bra for any length of time but the same claim would be made about your arm if you carried it in a sling for a few years.

If it were true unsupported breasts were painful even for women that had never worn a bra it would have been an evolutionary handicap 10’s or 100’s of thousands of years ago. Under those circumstances “Darwin” would have selected for breasts that met the nutritional needs of the young while not inhibiting mobility.

So I have always thought there must be some other evolutionary point to bras. Was it some sort of sexual attractant to change the shape and make a woman appear more youthful and/or healthy like red lipstick and other makeup? Or perhaps it could have been just the opposite; A means of suppressing visible clues as to the gender of potential victim in situations where the risk of assault was high.

And even more intriguing is that the latter hypothesis could mean that the invention and acceptability of the easily concealable firearm will reduce and/or remove the need for bras. We can only hope and keep teaching our women to be able to effectively defend themselves.