Yesterday I had a bullet in the bore in front of another complete cartridge that was fully chambered.  The bolt was in battery, the hammer cocked, and the safety was in the Total Devastation position.  But I thought better of dropping the hammer.  Well I didn’t think so much as feel that for some non-specific reason it might be a good idea to get out of my ready-to-shoot position and open the action.

I had fired hundreds of these cast bullet loads for a Win ’94 carbine and was having quite a good time shooting, using the new tang aperture sight after getting the sights dialed in.  The 311291 mold puts out a “bore rider” bullet, meaning the shank of the bullet ahead of the drive bands kisses the rifling as it’s chambered.  It’s supposed to make for better accuracy, and so far these have been pretty good in that department.  But my mold produces bullets that more than kiss the rifling– they have to be jammed in with just a tad bit more force than optimum.  I’ve chambered and un-chambered lots of them before without observing any sort of problem.

Yesterday, I don’t remember why, I decided to check the status of the rifle before taking a shot.  It was harder than usual to extract, so when it came loose, the bolt came back rapidly, expelling an empty case.  “Odd” I thought, “I’m pretty sure there was a loaded round in there.  Oh well.” (first red flag).  So I rammed the lever home to chamber another round.  It took more than the usual amount of force to chamber (second red flag).  But it chambered.

I actually had the rifle up to fire, and then…”Naw…I’ll be needin’ to see that cartridge.”  Again it was harder than usual to extract, and this time I could see fine ball powder all over the action and my hand.  “OK then, I’m done with the Winchester for the day.”

That first hard extraction had pulled the bullet from the case, but I didn’t notice the spilled powder because I had my long-range shades on (can’t see close-up very well) and the low, direct sun made for so much contrast that anything in shadow was much harder to see.  I didn’t notice the little detail of the still un-dented primer.  The next round was harder to chamber because I was forcing the first bullet deeper into the bore in front of the fresh cartridge.  The new brass was maybe a little soft, and maybe that bullet was on the large side of the size variation range, and maybe the case was on the short side of the narrow length range I had allowed, the crimp design is very good at preventing bullet set-back (which is the concern with tubular magazines) but poor at preventing bullet pull-out, so anyway the bullet pulled free and stayed behind when I extracted the case.  Never heard of such a thing, which is why I bring it up here.  Maybe I should get another bullet mold.

You know they say that for a single shot action, you don’t need any crimp at all.  After yesterday, with any bore rider design I would recommend a crimp no matter what.

Shooting alone is a real pleasure for me.  I love taking other people along and having a good time that way, sure.  Some of my best shooting memories come from having other people along.  I have to get out alone once in a while though, especially with rifles, and I highly recommend it for everyone.  It allows focus, and the contrast between the fire and the total silence during breaks does the heart good somehow.  On the issue of focus; I believe that the chances of my pulling that trigger on that double bullet load were fairly high, had there been company along.

Edited to add; Below is the bullet in question.  You can just see the engraving from the rifling.  That individual bullet fit pretty well, but others are a bit tighter (random variations in casting).  I should have posted this photo earlier to avoid some of the confusion.  “Regular” bullets begin to taper off right in front of the case mouth, but this one is designed to enter the bore in front of the throat, touching the lands.  The design helps align the bullet right from the get go.  For actual use, the front drive band at the case mouth (and those behind it) is sized to .309″ to tightly engage the .308″ barrel groove diameter and produce a good seal.  Also notice the ring around the back of the short ogive, from the seating plug that was designed for longer ogive bullets.  This photo was taken over a year ago, before I fired any of these rounds, and you’ll see that the case is either crimped very lightly or not at all.  This was a test seating.  You also see that the chamber throat is super short (the rifling comes very close to the case mouth, but it’s a largely non-issue here).  That’s not a problem with most modern full-copper-patched bullets either, but it does limit the styles I can use.  This #2 alloy cast 170 grain gas checked bullet load reaches 2,000 fps from a 16″ barrel, using White Label Carnauba Red lube and 33.5 gr of Win 748 with a WRLM primer.  The powder charge and primer are from the Speer manual as a jacketed load.  After 50 shots, the bore looks like a polished mirror (the powder burns clean and the bullets don’t leave lead behind). 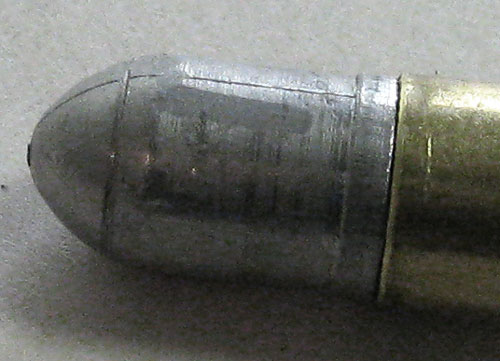 14 thoughts on “The Kaboom That Wasn’t”