And if we are going to safeguard our Second Amendment, it is time to elect a president who will defend the rights President Obama ignores or minimizes.

This president is moving us away from our Founders’ vision. Instead of limited government, he’s leading us toward limited freedom and limited opportunity. 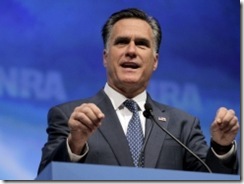 Photo credit: AP Photo/Michael Conroy
[Since Romney is a politician and his lips were moving I question how firmly, if at all, he believes what he says and whether he will remain true to these campaign promises. But he is saying some of the words gun owners and freedom lovers want to hear.

I want to hear that he is going to do more than play defense (“defend the rights”). I would prefer that he say something along the lines of what Newt said a short while later to the NRA (H/T to Bitter). We should be expanding the scope of the right to keep and bear arms to the rest of the world via the UN. That means a strong offense, not just defense.

For those of you who question the validity of that last sentence by Romney please see my QOTD-Barack Obama from October 28, 2008 with further info from Kevin.—Joe]

2 thoughts on “Quote of the day—Mitt Romney”