This morning I loaded up my Ford Escape with 400 pounds of Potassium Chlorate, boxes of ammo, Cafepress shirts, mugs, and miscellaneous other stuff and drove out to Boomershoot Mecca. I knew the ground would be wet and soft and I knew I might not be able to make it all the way out there but worse case I could leave the stuff at my brother’s place a mile or so away until the ground dried up. The last 150 yards were the only part of concern and I stopped to check it out before attempting to traverse it. I walked about 20 yards into the field and it was surprisingly firm in the track we had packed in the ground on our previous trips last fall and winter. I decided I could make it. I made it across the field and still had a fair amount of velocity when I tried to make a left turn up the hill onto the grass and weeds of the scab patch where the shipping container is. That was an error. I probably should have kept going straight and got onto the firmer ground ahead of me. I immediately lost all velocity and spun down into the mud.

The hybrid drive train is extremely anemic in reverse. It wouldn’t even spin the tires when I tried to back up. Attempts to go forward didn’t accomplish much either. I did manage to slide sidewise a bit into the softer mud of the field. 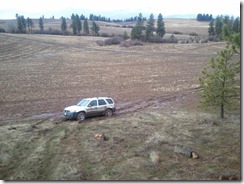 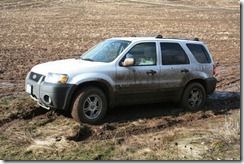 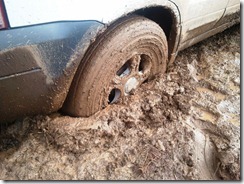 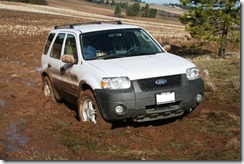 The sun was out and things were drying up so I figured I would have a better chance of getting out if I waited a few hours. My brother Doug showed up a little later. He was clearing out the drain tiles in the nearby fields. He came over to see what I was doing. He said the forecast was for 90% chance of rain after 11:00 AM. That made it an imperative to get the vehicle out almost immediately. He didn’t think the tractors would be able to get in any better than a pickup and another pickup out there probably would mean another stuck vehicle.

I already had everything else out of the vehicle and he helped me get the Potassium Chlorate out and the rest of the way up the hill and into the shipping container.

We both had shovels and starting digging the mud out from behind the tires. After we had three or four feet of soft mud removed from all the tires he pushed on the front and I drove. I flipped the back end around and up the hill to get close to a straight shot at the “road” back out of the field. The drive out threw a lot of mud in the air but I made it back to the road without problems.

I had lunch with my parents and brothers. Dad made a really nice lentil soup.

Doug and I both went back out in the afternoon and I did some cleanup and arranging of things and he rerouted some cables and oiled the squeaking (almost crunchy) things on the doors. Other than getting stuck it was a pretty productive day.

5 thoughts on “Boomershoot prep in the mud”