As kids, we liked to shoot, and one of the things we liked to shoot was cans.  Bottles were cool too, but we mostly did that at the dump since it sprays broken glass all over the place.  One of the first cans I shot was with .22 Shorts (very low power ammunition) from a handgun.  One bullet entered a can at a tangent and spun several times around the inside (“PZzzzzit!”) making the can levitate off the ground a little and leaving raised ridges protruding around the outside of the steel.  Fascinating.  That was in the 1960s.

So of course when I recently got some good performing loads worked up for a 30-30 Winchester carbine model of 1894, I was going to shoot some cans.  It’s the natural order of things.

The two milk cans below (both were filled with water) were shot using the same 170 grain bullet cast from #2 lead alloy, from the same carbine at the same distance.  The only difference was the powder charge.  The can in the first photo was hit at around 1600 feet per second, with the bullet coming in from the left and exiting to the right.  Note that the entry side is blown out much more than the exit (a not uncommon phenomenon when you have a harder outer shell containing a softer, more fluid material).  You can see that the neat little bullet entry hole is split in half.

The can below was hit at around 2000 fps, again with the bullet coming in from the left and exiting to the right.  It’s more like a cherry bomb went off inside it.  The top separated and flew waaaay up into the air.  I never did find it. 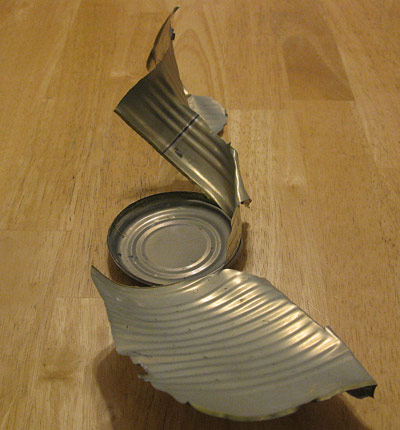 Yes it’s a little bit childish, and yes it is a lot of fun.  Though I’ve done this sort of thing hundreds of times and I’ve had this carbine since the mid ’90s, just the other day I found myself chuckling like a ten year old boy with a new toy.  It’s hard to explain.  Several previous outings were for the purpose of recording velocities, accuracy and sight adjustments for various loads.  That may be some fun, but it resembles work too.  This time out, just for shooting, was very different– more like a meditative state of near total concentration and peace.  Would that we could spend most of our lives in that state.

In case you’re wondering; I doubt there was any significant bullet expansion.  The hard cast round nose bullets were not recovered, but at those low velocities (for a rifle) I’d bet they held their shape fairly well.  I plan to try recovering some later, using several water jugs as a trap.  So we’ll see.