There are not many news outlets more hostile to gun ownership than MSNBC.

Or at least that is the way it used to be. Here we have an article in MSNBC telling us how much fun you can have with machine guns in Las Vegas:

You may want to set your sights on Las Vegas’ newest attraction, Machine Guns Vegas (MGV), which opened its doors Monday. Part gun range, part ultra-lounge, MGV invites visitors to grab the automatic weapon of their choice — Uzis, AK-47s and more — and get in touch with their inner gangster or SEAL Team Six commando.

“You’d be amazed at the number of people who come to Vegas and want to shoot a machine gun,” said co-owner Genghis Cohen. “It’s an experience you can’t have in a lot of places in the world.”

Gun ranges, of course, are nothing new but MGV puts a decidedly Sin City spin on the concept, a reflection, in part, of Cohen’s background in the city’s nightlife industry. He originally came to Las Vegas from his native New Zealand to open Tabu, the über-hip lounge in the MGM Grand.

MGV takes a similarly stylish approach, albeit an alcohol-free one, complete with leather furniture, hardwood floors and a bevy of “Gun Girls” led by model and U.S. Air Force veteran Jeannie Duffy.

I’m a little concerned the “Gun Girls” have the potential to reduce acceptance by women. But while she is quite attractive at least the picture of Duffy doesn’t show an excessive amount of skin or promise jiggle with the machine gun recoil: 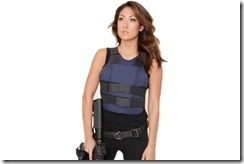 1 thought on “MSNBC and machine guns”