As today was Starbucks Appreciation Day (see also posts by Robb Allen, Say Uncle, Sebastian, Tamara, and Thirdpower <-MUST READ) as well as Valentine's Day Barb took the bus into Seattle to have lunch with me. The first thing we did was visit Starbucks where I bought a "Red Velvet Whoopie pie" on the recommendation of Sebastian plus a $50 Starbucks card for Barb and a $40 card for daughter Kim:

Barb took a picture of me in front of the store with my NRA Life Member patch and the receipts: 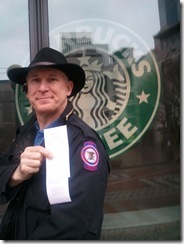 We went on to have lunch at a nice restaurant and I made a Tweet about our purchases at Starbucks. After lunch I purchased another $40 Starbucks card online for daughter Xenia who lives in Alaska. I Tweeted the total amount spent and it was Retweeted by three others.

That was a total of $131.64 we spent at Starbucks today. By all accounts the attempted boycott of Starbucks was a huge failure and I’m proud to have contributed to that.

Thank you Starbucks for respecting our specific enumerated right to keep and bear arms and state laws.

Update: I posted the following message to Starbucks Corporate:

My wife and I visited one of your stores today in support of your refusal to bow to pressure from anti-gun rights activists who attempted a boycott of your store today. I am the blogger who started the “buycott” of your stores two years ago and happily contributed again this year. I purchased a total of $131.64 today (mostly in gift cards) and blogged about it here: http://blog.joehuffman.org/2012/02/14/starbucks-appreciation-day-report/

Thank you again for not getting involved. Keep doing what you do best–supplying a product that is enjoyed by millions.

I was interviewed by the Los Angeles Times this morning about this blog post and the “buycott” of Starbucks. The main thrust was “Why did you do this?” I think it went well.

However there was some discussion of open carry and desensitization of people to the presence of guns in public and I may have messed up on this topic. In general I think there is little to be gained by this from a political perspective. There are cases where it does make sense but those cases somewhat rare. The decision to carry opening in public places needs to be carefully considered and evaluated on a case by case basis. I wrote a rather long blog post about open carry as a political statement and should be referenced before latching on to what may appear as a blanket statement by me against open carry.

The Los Angeles Times article is online now. My fears were not realized. The reporter accurately reported what was said and did not take liberties.

The Global Post also quotes me (via the LA Times).