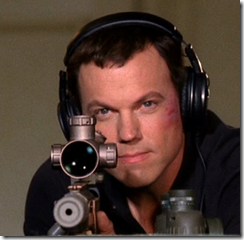 I would like to think he is practicing for Boomershoot. I think I will invite him.