For quite some time about 80% of my .40 S&W reloads would not fit in the case gauge even though they would fit in the chamber of my gun. The base of the brass had a slight bulge that the resizing die did not address.

I ended up using an old barrel to verify my reloads were not so far out of spec that they would fail to chamber. I was always concerned that using my old barrel as a case gauge was risky because it could be the current barrel chamber was slightly smaller than the old one and I would have a problem with some small percentage of the rounds. I really wanted to build the ammo to spec and use the case gauge.

I then discovered and purchased a Redding G-RX Carbide Push Thru Base Sizing Die via Sinclair.

I had some strong hints before purchase that it wouldn’t directly work in my Dillon 550B press but I figured I could figure it out. I was correct on both accounts.

The bottom end of the pushrod did not fit in the shellholder of my press. The die itself worked fine in the 550 toolhead. But the bottle intended to be used that attached to the top of the die would not fit among the other dies of the toolhead with an available opening.

It wasn’t a perfect match because it had different threads but the neck of a Dr. Pepper bottle (Coke, Pepsi, and most other soda bottles would not have worked because they have a shorter neck) had a gradual enough taper that it would fit among the dies. I cut the bottom out and screwed it into the adapter: 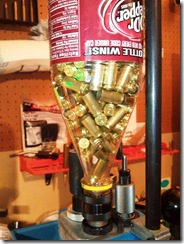 I took off the shell plate and verified the stroke and alignment of the pushrod on my press were close. But I needed some method to hold the pushrod in place. I strongly considered double stick tape and actually was about to buy it at the hardware store when I saw magnets just a few feet away. I found some very thin disc magnets that looked to be about the correct size and appeared to be strong enough to handle the pressure: 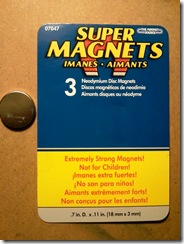 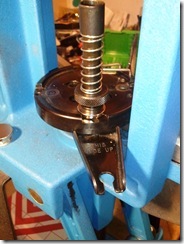 These magnets, as the packaging says, are extremely strong and held the pushrod firmly in place.

I resized about 100 cases in a few minutes and verified the base sizing die works as advertised. I’m very pleased with the result. My only tweak will probably be to buy a toolhead just for this die so I can use the correct bottle.