On Sunday Barron and I went to Boomershoot Mecca and mounted the solar panel on the pole and did most of the wiring for the power transfer switch and the solar panel. I was not happy with the mounting of the solar panel to the steel pipe with just two hose clamps. The panel has quite a bit of surface (wind) area, clamps are very thin with holes (weak spots) ready made from the factory. After we had it mounted it was trivial to rotate it on the pole. It just didn’t have enough grip. And if it would rotate that probably meant it could slide down the pole as well. We drove to Orofino for lunch and bought some friction tape at the hardware store. I wasn’t entirely happy with this solution but it was better than what we had.

I ultimately realized what were really needed was a U-bolt in addition to the factory provided clamps. The hardware store was closed by then and so we used the friction tape and cobbled something together that was better than nothing.

Also the conduit clamps I planned to hold the 1” pipe to the side of the shipping container started looking weak to me when I thought about the panel being pushed around in the wind. I installed two but figured four would really be better. It took a lot of time to bore and tap the holes into the corner of the shipping container so I decided the other two could wait until the next time I came out.

It was decided that I would look at the weather forecasts and if there was no high winds I would take care of it on Thursday when Barb and I go to my parents place a couple miles away for Thanksgiving. If there were winds forecast I would get up early Monday morning, buy the parts at the local hardware store, drive out to the site, finish it up, and still be able to get back to Moscow without being excessively late in my “work from home” week at my Seattle job.

The wind forecast looked good and I didn’t even bother to purchase the parts. Then about 9:30 last night I checked my email on my phone and found (in part):

Here is a current Wind Advisory for Boomershoot (Lenore, ID) until 8:00am, Wed Nov 23 2011, from your local National Weather Service office.

A WIND ADVISORY REMAINS IN EFFECT FROM 1 AM TUESDAY TO 8 AM PST WEDNESDAY.

I am already in bed, ready to go to sleep shortly and now I have 50 MPH winds forecast for Boomershoot in about three hours. Even 25 MPH winds would have made it difficult to sleep without taking some action to prevent the loss of the solar panel. I drove out to the site which is normally one hour each way but last night the roads had snow and ice on them. I used a rope to safely lower the pipe and solar panel to the ground and tie it to a couple of railroad ties (thanks Matt!) so it wouldn’t blow around and bang into some nearby rocks: 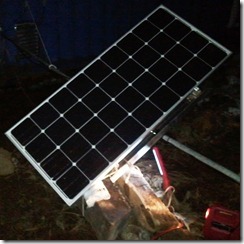 My Tweets for the little adventure were (minor grammar errors corrected):

We needed one more bolt to secure the solar panel against high winds.

I could have done it this morning but no winds were in the forecast so I could do it on Thursday when I was going to be there anyway.

A few minutes ago I got a wind warning for Boomershoot. Up to 50 MPH winds starting at 1:00 AM. On my way out to the site.

On site at #Boomershoot Mecca. Not much wind yet. Glad I didn’t try to drive across the field. It was very soft and muddy.

I’m going to take down the mast with the solar panel and Wifi AP. No cell service so this is the last Tweet until I get back home.

#Boomershoot Mecca solar panel is secure and I’m back home and in bed with @BoomershootWife where I belong.

This morning I received another wind warning for Boomershoot:

…WIND ADVISORY NOW IN EFFECT UNTIL 4 AM PST THURSDAY

The winds are going to last until 4 AM Thursday? I’m really, really glad I took it all the way down rather than just tried to lash it together a little better with the rope or paracord. I’ll get the parts tonight and get the panel back up later this week after the winds have died down.

3 thoughts on “Bracing against the wind”